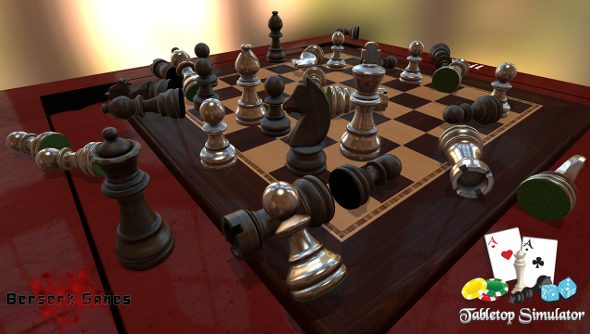 The existence of digital tabletop games is one of the best things to come out of this confusing universe. Sometimes I like to think they are just created for me. Most of my local chums don’t care for tabletop gaming at all, even if they care about video games. So it’s rare that I can sit down and play anything, whether it’s chess or Dungeons & Dragons.

Berserk’s Tabletop Simulator‘s premade games cater to fans of the more traditional tabletop games, like backgammon and checkers, but that’s the only traditional thing about this multiplayer, customisable sandbox. There are no rules. This might seem a bit bonkers when games are all about rules, but Berserk hopes that without restrictions, players will create their own rules and make their own games.

I vividly recall the first time I beat my dad at Risk. It was also the last time we ever played. I took Australia from him – for some reason it was his favourite region – and he just lost it. He flipped the board and stormed out into the garden to cool off.

You can do this in Tabletop Simulator. You can grab chess pieces and fling them around, flip tables or act like a belligerent drunk. But when you don’t want an angry man ruining your game of poker, there are admin tools that can be employed to prevent griefing.

And if basic card games or pachisi aren’t really your speed, you can import any image onto the board and spawn your own objects, creating a game that isn’t in the pre-made list or just inventing your own.

There are 10 days left in its Kickstarter campaign, and it’s already gained triple what Berserk were asking for. Now it’s in stretch goal territory and has already ticked an engine upgrade and RPG tools off the list. If it reaches $15,000, Berserk will create an Oculus Rift version. So obviously it must reach $15,000. Berserk also wants it up on Steam.

Tabletop Simulator has the potential to be something pretty damn special. You can take the single-player version for a spin right now, too.