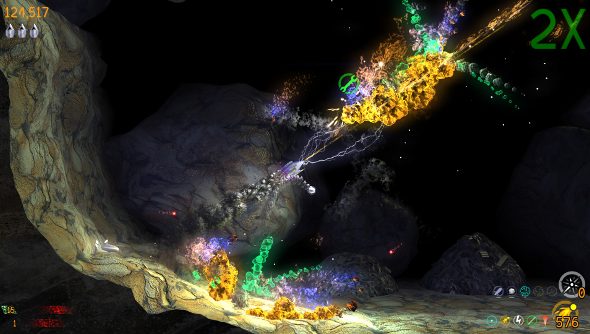 I’m not the guy you want controlling your spaceship in a shoot ’em up, a genre I dearly love and yet have never shown any aptitude for. So I have absolutely no doubt that Terry Welsh’s Retrobooster is going to pose some problems for me.

It simultaneously evokes memories of ’80s shoot ’em ups with frenetic yet skill-based space shooting, bullet-hell sequences and puzzles but mixes things up with a ship that’s extremely responsive and a detailed physics system. Terry was designing simulations for NASA before he started work on Retrobooster, so he knows a few things about traveling through space.

Retrobooster has been on Greenlight for a while, but it’s about to launch via Desura, the Humble Store, Indie Game Stand and via the game’s website on February 21st.

It’s going to be challenging enough to make it through the game carefully, while working your way through devilish alien puzzles and saving human survivors, but for those with a bit more dexterity and practice than I, you can attempt some high scores as you might expect from a shoot ’em up.

There’s split-screen multiplayer to boot, perfect if you want to embarrass yourself in front of chums.

It’s also pretty damn easy on the eyes, which is the only place it’s easy.