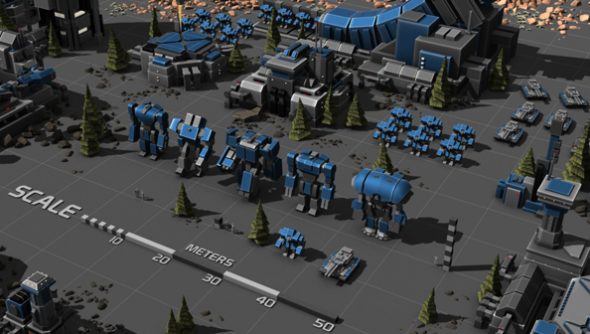 Early access to Planetary Annihilation began with a bang last week for backers, but less welcome explosions soon followed as newcomers turned up at the gate to discover a near-vertical $90 entry fee.

Consider those new would-be fans, if you will, the Rock. And those Kickstarter obligations sat on Uber Entertainment’s shoulder? The Hard Place.

Planetary Annihilation will retain its $90 price point until the end of August, by which time the developers will have locked down the game’s key features and lopped $30 off its fee.

“Our pricing for this stage of early access was determined by our Kickstarter,” said Uber producer Marc Scattergood. “This access is permanent access – you will be able to play through alpha, beta and on through retail.”

Uber will be optimising and balancing the game from September through November, ready for the game’s retail release in December.

“Our Kickstarter set these levels, and while we understand people may not like it, it’s the decision we had to make,” said Scattergood. “But that is the schedule if you want to wait until the price drops to a level you’re more comfortable with.”

I do empathise with Uber – pricing decisions made in the context of Kickstarter’s tier system tend to look very different in the cold light of day – but itis a huge askfor a game still a long way from its final feature set.

Have you bought your way into the unofficial follow-up to Supreme Commander regardless? Or will you be holding fire til Christmas?