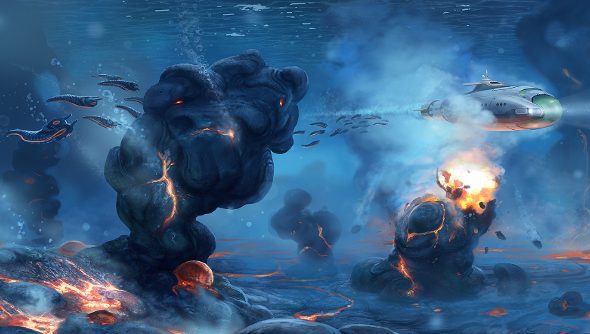 Natural Selection 2 developer Unknown Worlds is nothing if not ambitious. Today the studio announced its next project: Subnautica, an underwater exploration and construction game that merges elements from RPGs, sandbox exploration titles and cinematic games. Unknown Worlds believes they’ve gone and created a brand new genre.

Not yet in alpha, it’s being developed by a small team who are working on prototypes, designing concept art, composing soundscapes and developing core gameplay mechanics. The aim of the game is to “elicit a feeling of experiencing the unknown: A sense that you are exploring an untouched world, not knowing how far, or how deep you can go.”

Players will be able to build their own submarines and equipment, assisting them as they go further into the unknown, while trying to deal with the hazards of this underwater realm. Unknown Worlds has already posted a bunch of absolutely lovely concept art and a few atmospheric audio tracks to warm your eyes and ears, so go check out the blog.

Fans of Natural Selection 2 need not worry that this new project will detract from Unknown World’s other game. A seperate blog post details the impact Subnautica’s development will have on Natural Selection 2: it won’t affect it at all. “What does Subnautica mean for NS2? Does it mean that NS2 will stop getting love and attention? Is Unknown Worlds abandoning NS2? Absolutely not! Subnautica will have no effect on NS2, and all planned NS2 work will continue untouched.

“Subnautica has been cooking away in secret for quite some time. During that time, multiple NS2 updates have been released. Nothing changed today in development terms at Unknown Worlds, we simply revealed our work on Subnautica.”