Things are going poorly for the blue team in this control point match of Infinite Crisis. The Flash and Green Lantern are chain-dying all over Gotham Heights, and Doomsday can only be so many places at once. I can’t really blame them for struggling, though: they’re fighting two Batmen at once, one of whom is a gadget-wielding steampunk assassin and the other is a seven-foot tall human-bat hybrid that is ripping people apart with his claws and snaring anyone cowardly enough to run.

That’s the thing about Turbine’s Infinite Crisis, a superhero-driven MOBA. Every character might be a superhero, but it turns out there are even nastier versions just a few parallel dimensions away. When you’re facing two versions of Batman, you might need something a bit stronger than Shazam.

I played two full five-on-five matches of Infinite Crisis, each time controlling Gaslight Batman, an AD Carry type hero and a version of Batman who has arrived from a parallel steampunk dimension. My particular variant is wearing a fanciful samurai skin, complete with a terrifying mask, battle flags, and yellow samurai armor with black lacquer. It’s not just a different outfit: these skins look like they are stepping out of completely different comic books from different artists. My samurai is done in woodcut-influenced, anime-style pen and ink, while the regular Gaslight Batman looks a bit more lavish and oil-pointed. My teammate, Nightmare Batman, is a Gothic demon rippling with sinews and and covered in leather wings, sharp talons, and savage fangs. Nightmare Batman is the brute to Gaslight Batman’s mad inventor, and the difference comes out in their fighting styles. 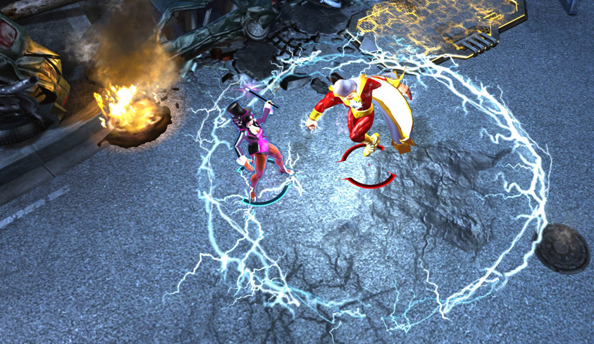 That’s the core conceit of Infinite Crisis: the multiverse is merging as part of a cataclysmic event, and the familiar DC comics heroes suddenly find themselves confronting versions of themselves from other realities. It’s not just a fun twist on iconic characters, but the cornerstone of this new MOBA’s metagame.

It’d be both premature and likely dishonest to say that Infinite Crisis is doing anything profoundly different with the MOBA genre, but the theme matters. Playing a strong MOBA with fanciful DC comics characters and superpowers makes familiar tropes suddenly feel new and cool again. Using a speed boost ability might just be a traditional charge power, but using it to plunge through a mob of enemies, escaping a taxicab that Doomsday just flung at you, then turning around a firing off proximity mine to hammer him during his pursuit before finishing him off with a sonic blast called Batscream… well, that’s a real, “I’m the Goddamn Batman” moment.

There are a few nice concessions to accessibility present in Infinite Crisis. For one thing: last-hitting is still the fastest way to get gold (“merit” in the game’s terminology), but you can still pick up merit coins left behind by creeps (“drones”) if you don’t succeed in delivering the killing blow. It’s far less efficient than getting last-hits, but it at least gives you a little cash to spend on upgrades. 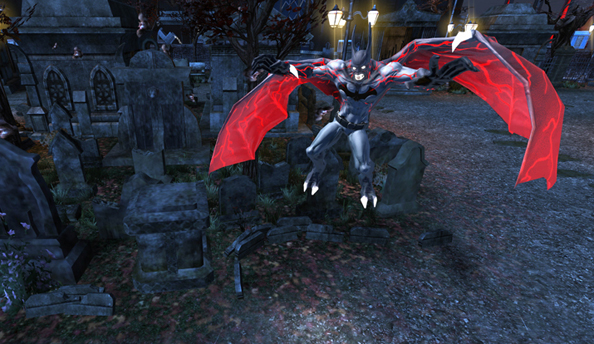 Speaking of gear upgrades, Infinite Crisis doesn’t have big item tiers with lots of prerequisites. Rather, each item is upgradeable by itself. So Batman’s utility belt provides extra health and armor right from the start, and the Tier 2 version offers even more health and bonus attack damage. It also seems to make the choices a bit more stark: you can either pursue life-steal or critical damage, but you can’t build them up alongside each other and then combine them into a powerful high-level weapon. You have to choose what to prioritize.

The mode I played was a control-point match set on a circular level with five capturable points along the periphery, and a park in the center. Each team had 300 points that slowly counted down depending on how many control points the other team controlled, and it turned into a deadly game of cat-and-mouse as both team attempted to protect their own holdings while picking off the enemy’s. At one point, my team had to rally in the central park in order to destroy a beacon that the other team had activated. The beacon was calling down a meteor that would destroy a crucial lane entrance near our spawn point, denying us map control. We chased off the Joker, then destroyed the beacon, causing the meteor to plunge into the center of the map and sending a shockwave across the entire area. These kind of catastrophic events are a major part of Infinite Crisis, forcing both teams to adapt their strategies as their priorities shift and sections of the map are irrevocably altered and shattered. 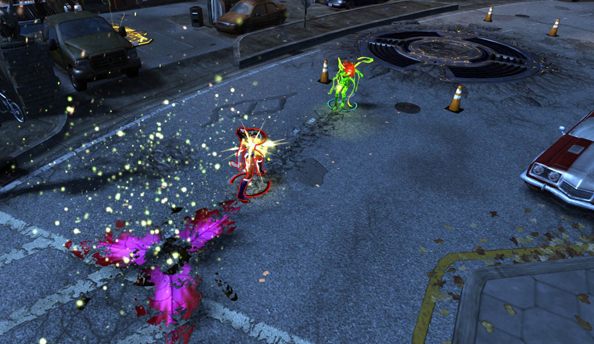 Turbine are also working on a three-lane map that will be familiar to most MOBA fans, and then another map that they say is very different and, for the moment, still top-secret. But there are enough clever twists on the MOBA formula here to make me excited for whatever special game mode Turbine are creating. More important, Turbine seem not only to be making a strong MOBA with tons of DC flavor, but one that is even better than that combination sounds.