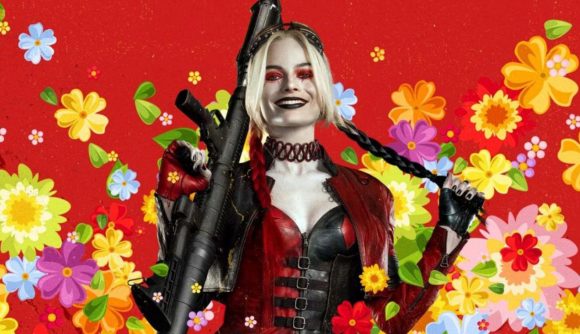 The Suicide Squad movie director James Gunn has revealed that NetherRealm’s Injustice 2 inspired a key piece of the movie’s marketing – Harley Quinn’s red and black outfit, which appears on all the posters despite it only featuring in the movie for a few minutes.

It was reported earlier this year, after the first trailer released, that Harley Quinn (Margot Robbie) would be wearing an outfit in The Suicide Squad based on her look in the Batman: Arkham games – according to James Gunn. In retrospect, this may have been an error on director James Gunn’s part, since the outfit is blatantly Harley’s from Injustice 2.

Gunn revealed this alongside some concept art for Harley’s outfits by Christian Cordella under Judianna Makovsky, including the Injustice 2 outfit and both stages of the dress she wears in the latter half of the movie. NetherRealm’s Ed Boon also replied with a thank you and still no confirmation of Injustice 3, darn it.

It’s not the only time the Injustice series has inspired the movies, either – it directly influenced the ‘dark future Superman’ dream seen in Batman V Superman too. Superman, Harley, and the Suicide Squad will all feature in next year’s Suicide Squad: Kill The Justice League, which is about to get its next showing at DC Fandome on October 16.