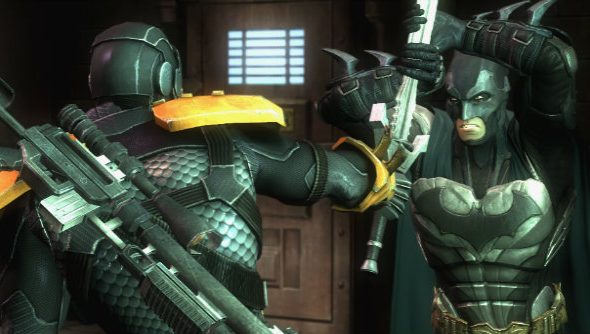 It’s that time of the year again where the rumours are not only circulating heavily, but they’re also more likely to be true. Publishers are preparing for E3, and some people and outlets are being given insider-information to prepare for the event. Luckily for us, those people like to talk, and they’re now saying a sequel to Injustice: Gods Among Us will be revealed around E3.

Get ready for some PC-based scrapping with our list of the best multiplayer games.

It looks like fight fans are going to be serviced on PC in the future. Earlier we heard whispers of Tekken 7 coming to PC, and now it seems we’re getting a sequel to Injustice – that DC Comics fighter made by the Mortal Kombat team – if this report from French website Gameblog.fr is accurate.

“One of our sources has confirmed that Injustice 2 is about to be unveiled in the coming days,” claims the site. “Maybe even just before E3 which starts next June 14 in Los Angeles.”

The site goes on to claim NetherRealm will remain on development duties and the game will be built in the Mortal Kombat X engine.

Take this with a pinch of salt for now, but it’s suggested Injustice 2 will launch in March next year. To be completely honest, I’m looking forward to the opening cutscene more than the game itself. It just has to live up to this beauty:

Not as good as DC Universe Online’s opening cinematic, but still.