The Oculus pre-E3 conference wasn’t just jargon and Phil Spencer’s menacing grin, there were also games. Well, trailers for games. CCP showed up with a Valkyrie video, but they were also joined by Insomniac and Gunfire Games, who showed off Edge of Nowhere and Chronos, respectively.

If you missed the conference, you can smear your damp eyeballs all over the trailers below.

First off, here’s Edge of Nowhere:

It’s a third-person action adventure set in the Arctic, where it’s bloody freezing. Players will find themselves in the frozen shoes of someone searching for a missing expedition, but the deeper they go into the region, the more strange and deadly it gets. Expect makeshift weapons, madness and survival stuff.

Chronos is another action adventure, this time set underground. Once a year, a gloomy labyrinth containing an unpleasant dragon opens up, and if the protagonist doesn’t manage to kill it, then he has to wait another year. That means he ages, getting older, changing his abilities. I’ve been noticing that, myself. I forgot how to fight goblins last week.

It’s a surprise that both of the games shown off at the conference were third-person, not first-person. VR’s being positioned as this ubiquitous thing, perfect for everything from space games to real-time strategy, but I suppose I’m still not used to the idea. 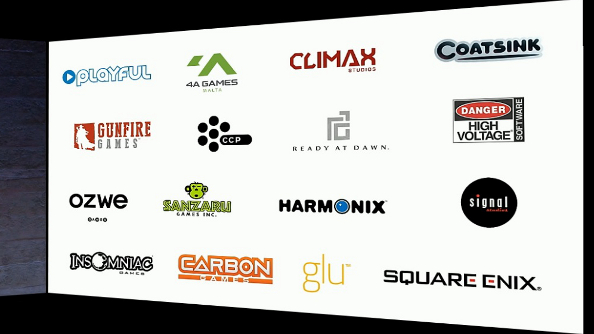 A slew of other developers were revealed to be VR colluders, and Oculus says it wants to promote indie VR games particularly. With that in mind, they’re investing $10 million into independent development. It’s not clear what that actually means, though.