Intel have announced some funky new security features, including one that will utilise their graphics hardware to help find and eliminate particularly stubborn forms of malware. Forget all that Spectre and Meltdown stuff, Intel chips are super safe, honest. Serious.

There is some nefarious malware that hides away from traditional virus and malware scanners by avoiding writing anything to your storage drives. That way they can avoid the file-scanning standard method of tracking down dodgy software. There are some smart malware scanners that will go through your system’s memory in order to track down the well-hidden little scummers, but they can have a seriously detrimental effect on your rig’s performance.

This is what Intel are hoping to alleviate with their GPU-based memory scanning. The Advanced Memory Scanning (AMS) feature is meant to rid you of the CPU performance penalty of other methods – sometimes up to 20% CPU load just for scanning – by shunting the workload onto their integrated GPUs. 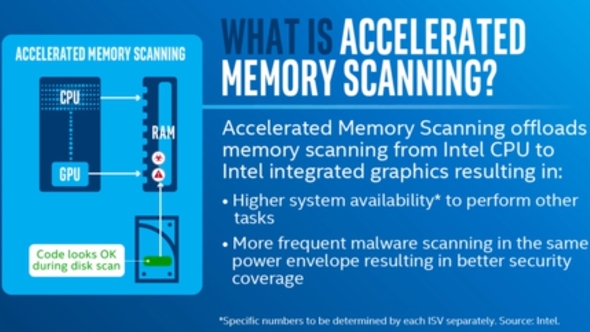 Intel reckons that by getting the GPU to search through the system memory for any nefarious malware signatures they will reduce the CPU load to just 2%. The idea is that in standard desktop situations the graphics silicon isn’t really up to much and so can be tasked with malware scanning while you’re browsing, YouTubing, or whatever it is you kids do with your PCs these days.

Don’t worry, it’s not going to decide your GTX 1080 looks like a more willing participant in the search and destroy mission and suddenly commandeer its GPU power – the integrated graphics silicon on your Intel processor has full access to your system RAM, something your discrete GPU doesn’t have. To start with, it will just be Windows Defender offering the Intel GPU service, but others will follow.

Though it’s not 100% clear whether this is just going to be available to systems which only use the integrated GPU by default – like laptops and low-end desktops – or whether it will still be accessible even when a discrete graphics card is in use. 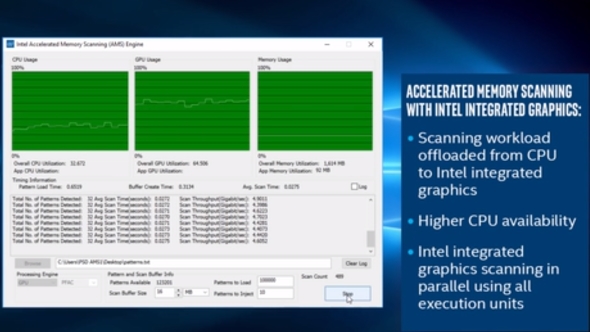 The second security feature is using cloud computing and machine learning to figure out if your PC is under attack whether or not the type of attack is well known to the system. It’s going to be incorporated into Microsoft’s Windows Defender Advanced Threat Protection software later this month. Using inference Intel’s Advanced Platform Telemetry will take diagnostic data and use machine learning to see if there are any patterns that seem strange.

It will then flag these up oddities, potentially discovering malware or system attacks before they’re known or understood. Intel has been keen to point out that all the data is anonymised and generalised so there is no danger of a breach in data security from the cloud keeping an eye on your CPU.