The great race for more cores is into its second leg. AMD shot the starting pistol with Threadripper and now Intel are upping the ante on their X299 platform. The biggest and baddest of them all, the 18-core i9 7980XE, has just waltzed onto the scene and ripped the multi-core performance crown right off AMD’s head.

You can’t enjoy your new ridiculous rig without a quality screen. Here are our picks for best gaming monitor.

Intel have been launching their top processors since June, with the i9 7980XE expected to finally complete the extended X299 lineup in October. Arriving with a whopping $1,999 price tag, this 18-core monster is a pretty limited, extreme-use case, and before it’s even launched I can confirm it won’t be making our best gaming CPU list.

Intel can’t be expecting to ship vast amounts of the i9 7980XE. However, in lieu of sales, just taking the crown from AMD’s 1950X for best multi-threaded performance has its own hearts and minds benefits. If the benchmarks leaked by VideoCardz, are accurate, then this is exactly what Intel have succeeded in doing. 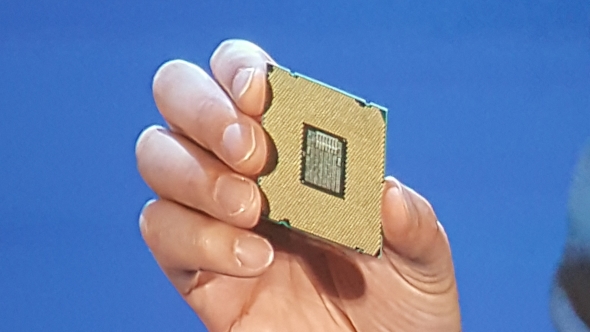 In Cinebench R15, the Core i9 7980XE breaks the 4K barrier, posting a score of 4,204 compared to AMD’s 1950X at 3,069. That is a massive 37% increase in performance, especially impressive compared to the 131% increase over Intel’s previous generation top-end chip, the 6950X. What a difference a year and a half (and some panic-inducing competition) can make, eh?

The story continues in other benchmarks, with the i9 7980XE smashing the 1950X in multicore performance. 3DMark Fire Strike scores the i9 7980XE at 32,201, with the 1950X at 27,579, a 17% increase. Intel’s two extra cores and four threads are no doubt giving the blue team the expected edge over the 16-core Threadripper competition.

An Asus ROG Zenith Extreme motherboard was used for the benchmarking system, which may explain the especially high all-core clock of 4.2GHz. Whether this is consistent across other boards is yet to be seen, but obviously take these early benchmarks with a grain of salt, regardless. 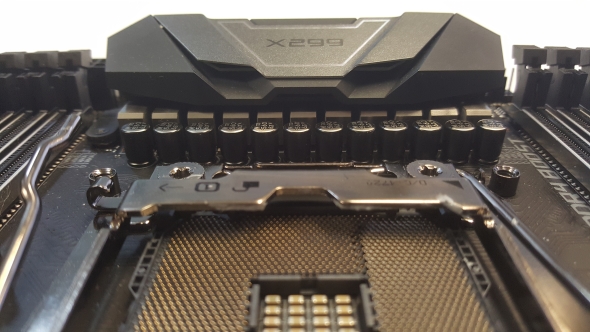 Overall, the Intel i9 7980XE far outperforms AMD’s Threadripper 1950X. For the discerning professional, the extra performance surely won’t justify the 100% increase in price, and I doubt many enthusiasts will want to shell out quite this much dollar for the privilege of those two extra cores. 6950X users, on the other hand, must be scratching their heads over the sudden and massive performance boost over their $1700 chip from just over a year ago.

The i9 7980XE shows that Intel, despite AMD’s best efforts, can’t be beaten at their own game, but at what cost? Then again, if AMD really wanted to make an exorbitantly expensive and unrealistic chip themselves, I’m sure they could – they have a 32-core EPYC chip after all.