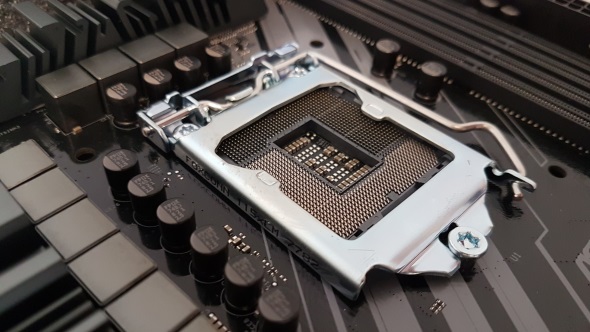 MyDrivers have leaked an Intel roadmap slide from a recent Chinese event, attended by a host of industry peops, showing the full Intel Coffee Lake desktop range, along with its accompanying chipsets, finally hitting the market between March and April next year.

Want to know how to get the most out of your current chip without having to upgrade? Check out how to overclock with our simple guide.

The MyDrivers page has subsequently been taken down, but you can still see the roadmap they shared over at Hexus. The timings on the roadmap show the production windows of the different products Intel has got lined up for a 2018 release so far, with the full 6, 4, and 2-core Coffee Lake range set to start rolling off the line early in the year.

The sales embargo for the Coffee Lake chips is noted below the production window roadmap as being sometime between March and April. We’ve heard some noises about a new Coffee Lake refresh and it looks like we’ve now got a release window too.

That ought to be when we’ll finally see the full range of motherboard chipsets too. We’ve been waiting since the initial Coffee Lake CPUs were launched, with their solitary, high-end Z370 chipset, to see more mainstream H370, B360 (not B350… thanks AMD), and H310 boards arrive. And the wait goes on.

With the first quad-core i3 arriving with the Coffee Lake vanguard, the H370 / i3 8350K could be a mighty budget gaming combo. The chip is essentially the overclockable Core i5 of the Kaby Lake generation, the i5 7600K, but for around $100 (£100) less. It doesn’t make a lot of sense with only the high-end Z370 boards available, but once the H370 and B360 boards touch down in 2018 – hopefully with a modicum of overclocking support – we could be looking at the best mainstream gaming setup.

There is also an update on the roadmap to the ultra high-end segment of Intel’s desktop range. The Skylake-X series is set to carry on through 2018 up until the end of the year, when the new Cascade Lake-X series is set to take over. We don’t know a huge amount about Cascade Lake-X yet, but the current expectation is that it will be a refresh of the current Skylake-X range, with a slightly updated 14nm+(+?) production process. I mean, surely they can’t squeeze any more cores in there, can they?