Intel have today announced that they’re finally delivering data drive acceleration to their Intel Optane Memory technology. That means your bloated old hard drive, which sits alongside your SSD boot drive holding onto your Steam library’s overspill, will actually be able to get close to solid state pace.

Check out our pick of the best SSDs for gaming.

The Intel Optane technology has always been a smart bit of storage accelerating goodness… it’s just that in these days of affordable SSDs many PC gamers have already got their Windows installation booting from one.

And until now, Optane has been limited to only doing its speed-boosting magic on the boot drive, so if you’ve got a small SSD boot drive allied to a larger hard drive looking after the bulk of your game data, then you’re not going to see any benefit from the affordable M.2 based memory.

Intel struggled to get the joint 3D XPoint tech off the ground after working with Micron to put it together. Finding a home for it with the storage-accelerating PCIe Optane drive was a smart move, but it’s been largely irrelevant for most of us.

It essentially works as a cache drive, figuring out what the most regularly used data is on your slow hard drive and keeping those files stored inside the speedy Optane tech. And it does all that invisibly too, without you having to do any sort of file management to get it running. 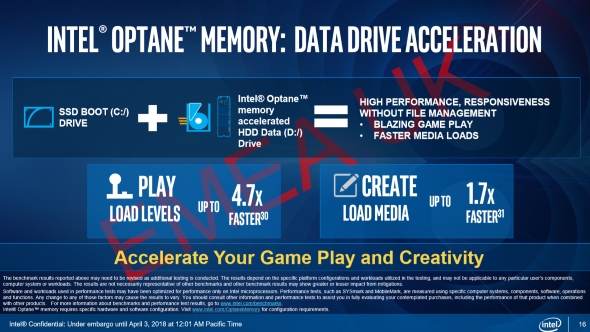 Intel are estimating that, with an Optane drive attached to a HDD boot drive, you’ll get game level load times cut by a huge amount. They’re expecting levels to load by up to 4.7x compared with a standard hard drive.

Thankfully, with it now actually making a difference to your data drive the $37 (£32) 16GB Optane drive will be a worthwhile addition to your gaming armoury. And, with the latest Z370 – and now H370 and B360 – motherboards offering at least two M.2 sockets, you’ll likely have a spare port to drop one into.

We’ll do some serious testing on how the technology reacts alongside an SSD boot drive soon, and see how well Intel’s predictions stand up.