The Stratix 10 GX 10M FPGA utilises twin dies to offer unrivaled size and performance for a chip of its kind – at 10.2 million logic elements. The company’s EMIB (Embedded Multi-die Interconnect Bridge) now sits between the two adjacent dies on the Stratix package for the first time, allowing for a massive inter-die bus of 25,920 connections – or 6.5TB/s of bandwidth (via Tom’s Hardware).

Previously, EMIB had been used in limited applications, such as the Kaby Lake G processor. This was a cooperative venture with AMD, which connected a Vega GPU chip to High Bandwidth Memory close by on the package. Now, it seems, Intel has started to up its game and use this technology to connect two logical dies – ostensibly achieving the same results as AMD’s Infinity Fabric interconnect.

AMD’s Infinity Fabric interconnect is used across its Zen 2 processor lineup, in both EPYC and Ryzen, to connect multiple 7nm chiplets to a central 12nm I/O die. Intel’s yet to utilise its comparative technology within any client processors, however, it is rumoured (via Charlie Demerjian of SemiAccurate on Twitter) that Intel’s 2021 server architecture, Sapphire Rapids, and the two following may use EMIB for memory – and perhaps even for die-to-die interconnectivity. 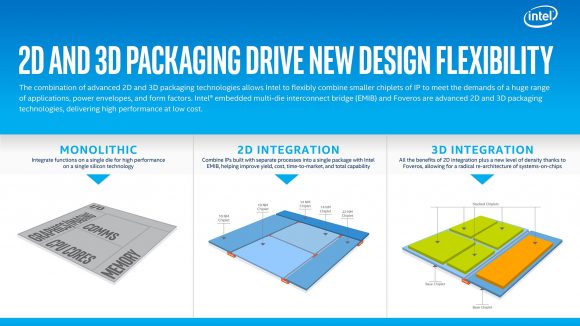 The company also is planning on drastically increasing the size and performance of its next-gen CPU architecture, which could go hand-in-hand with further developments in the aforementioned tech.

While 2021 is still some way off – we won’t be seeing chiplet-based designs from Chipzilla in the best gaming CPUs just yet – the latest FPGA is a sign of things to come from the company. AMD has already made its thoughts clear on the future of computing – monolithic dies can only scale up so far – and Intel’s not far behind with its own competing technologies, including EMIB, interposers (which are largely regarded as less elegant than EMIB connections) and its 3D stacking Foveros tech.