Gigabyte has subbmitted its range of Intel Comet Lake motherboards to the Eurasian Economic Commission registration process today. There are a host of Z490, B460, and H410 motherboards in the listing, giving us a full range of boards ready for the next generation of Intel’s 14nm CPUs.

It’s interesting that Gigabyte would be registering its next-gen motherboards so early when it’s widely expected that the Comet Lake chips, bearing Intel’s first non-HEDT 10-core processor, wouldn’t be seeing the light of day until well into 2020. There are a total of eight Z490 boards listed, with three of them being micro-ATX versions, ten B460 boards, and six H410 options. The fact that we’re seeing all the different chipsets represented in this listing, and not just the high-end Z490 alone, suggests that Intel won’t be doing the standard staggered launch it traditionally does. And maybe suggests it could happen sooner than we think.

I’m an absolute sucker for that stormtrooper chic aesthetic – that’s why I’ve always loved Asus’ Prime Deluxe boards – so I’m particularly interested in the touted Gigabyte Z490 White edition. Give me some simple white panelling and chipset covers and I’ll be happy as Lord Vader.

There are no extra details about actual boards themselves in the EEC model listing, and no other board manufacturer has so far put their motherboards through the system, so it’s not looking like it’s all hands to the pumps. If the likes of MSI, ASRock, Biostar, and Asus had also registered their Comet Lake boards today I’d be tempted to suggest that Intel had pulled in the launch of its new range of processors. 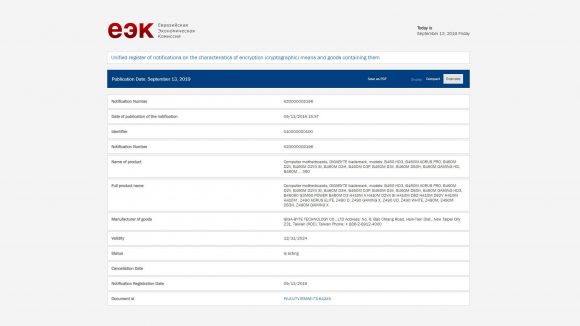 As it is this listing is probably no indicator that the new generation of Intel Comet Lake chips are being imminently released. We’ve still got the Core i9 9900KS being released in October and it would be strange for Intel to immediately usurp it’s position as King Gaming CPU by shipping the 10-core Comet Lake flagship soon after.

Strange, but not entirely unprecedented.

Intel has previous form of cutting the legs of recently released products – anybody remember the Kaby Lake-X? No, there’s a good reason for that…

But if you’re interested in one of Intel’s Comet Lake chips then you are going to have to look at one of the new Intel 400-series chipset boards, Gigabyte or otherwise, as it’s reportedly changing the pin layout of the socket and adding a few more in. There are reports of the new socket being LGA 1200 as opposed to the current LGA 1151 standard.

We’ll keep our eyes out for any more companies registering their Comet Lake motherboards, as that could be an indicator that something is actually happening in Intel’s bid to combat the mindset dominance of AMD’s Ryzen 3000 processors.

Are you excited by Intel’s Comet Lake chips, or are you AMD Ryzen through-and-through? Join the conversation on this article’s Facebook and Twitter threads.