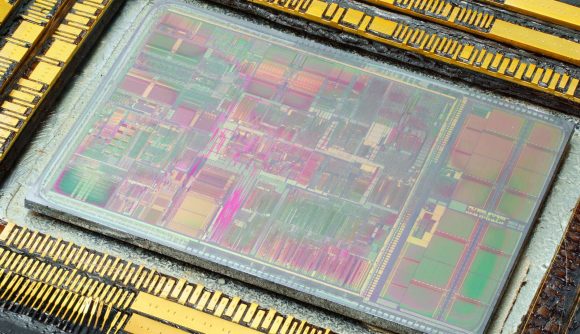 Intel Comet Lake-S desktop CPUs are finally upon us, even if stock is hard to come by. From the budget-end Core i3 10300 up to the fastest gaming CPU, the Core i9 10900K, the lineup has something to offer for gamers of any budget. What people have been looking forward to even more than Intel Comet Lake, though, is Rocket Lake, the company’s next processor generation. But we’re now hearing rumours about its somewhat strange core configurations.

VideoCardz has reported on a photograph received from a “reliable source”, showing a lineup including a supposed next-gen Intel Core i7 vPro CPU that hosts eight cores and 12 threads. Now, I’m no mathematician, but I’m pretty sure eight times two is 16, not 12. The most likely explanation for an eight-core, 12-thread CPU is that four cores have hyperthreading, and the other four don’t.

The photograph also shows that these are supposedly vPro CPUs, these constituting a hardware and firmware platform aimed at enterprise customers that enables remote management of PCs without access to the CPU, firmware, or operating system – so that, for instance, your company’s IT administrator could update your laptop to resolve any problems while you’re away on a business trip.

Regarding the eight cores and 12 threads, VideoCardz says it was “unable to confirm if this is a typo in the document” but that “this ‘unexpected’ CPU configuration was the reason we received this picture in the first place”. We’ve reached out to Intel for comment on the possibility of different core configurations in 11th Gen desktop CPUs.

The photographed Core i9 CPU also features a different core figuration to the one that we’d expect.

So, the photo also shows an Intel Core i9 processor at eight cores and 16 threads, the same as the previous 9th Gen Core i9 9900K and unlike the 10th Gen i9 10900K (which has ten cores and 20 threads). If this leak is legit, then we can tentatively assume the same core configurations for non-vPro Rocket Lake-S CPUs – after all, Intel 9th Gen vPro CPUs had the same core counts as their non-vPro counterparts.

We’re all hoping that Intel Rocket Lake-S gives us our first new Intel Core architecture upheaval since 2015’s Skylake and will be fabricated using a 10nm process to boot. This is one optimistic way to look at the strangely lowered core/thread counts in this photograph: if there’s an entirely new and drastically improved architecture comprising the next generation of Intel CPUs, what need is there for piling cores upon cores? Maybe the architectural improvements will shine that brightly – we’ll have to wait and see.