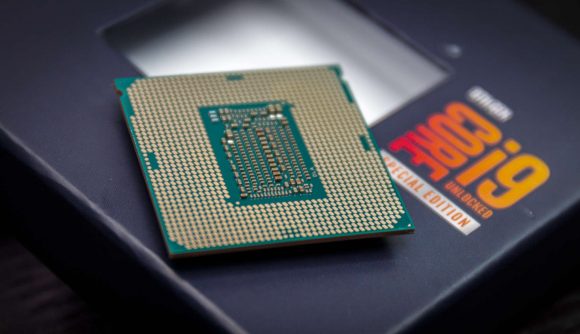 The 10-core/20-thread Intel Comet Lake Core i9 10900K will run at 3.7GHz base and 5.1GHz boost, according to recently discovered 3DMark benchmarking results. Likely launching as the flagship model under the desktop 10th Gen branding, this 14nm processor will be Intel’s best chance at staving off AMD Ryzen in 2020.

The results were surfaced by leaky Twitter user _rogame, and allude to a chunky boost clock of 5.1GHz for Intel’s 10-core processor. While sure to deliver somewhat faster in-game performance than its predecessor, and a two-core multithreaded boost for content creation and the like, the i9 10900K remains only marginally faster on paper than the 5GHz Core i9 9900K.

This is, in part, due to the reuse of the 14nm Skylake architecture, which has seemingly reached nigh-on maximum potential following four subsequent generations of Intel Core processor. There’s still no word as to the TDP of the i9 10900K, this specification was omitted from 3DMark’s database, but its all but confirmed specification on an existing process is sure to gobble up some serious power.

The arrival of, what appears to be, a finalised i9 10900K processor suggests the 10th Gen Intel Comet Lake release date is nearing. There’s also been word of compatible motherboards, led by the overclock-enabled Z490 chipset, launching in May, portent of a chip launch that same month.

Will the i9 10900K be enough to crack AMD Ryzen’s best CPU for gaming chops? Rumour has it the company may be considering price cuts similar to those employed with its HEDT Cascade Lake X processors, but that could merely be wishful thinking on everyone’s part. And irregardless of reasonable price cuts, that’s still a mighty feat for the ageing Skylake architecture.