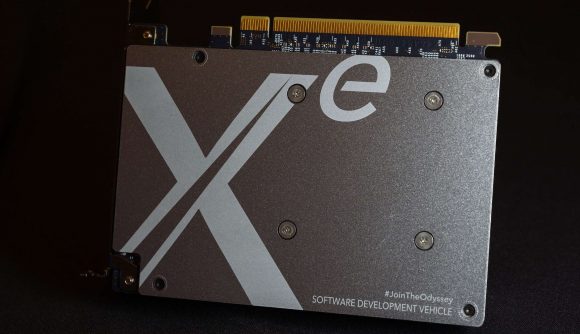 Some new Intel Xe DG1 benchmarks have surfaced via the now-traditional hardware leaky channels, namely Twitter’s tech analysts. They show a Coffee Lake-based Core i5 9600K chip paired up with what is being claimed is the Intel Xe DG1 graphics card and the system being put through the ringer in 3DMark 11. And, for the most part, it comfortably gives the new Ryzen 4000 APUs a pasting. Though as a discrete GPU, it really should.

This setup could well be the Software Development Vehicle (SDV) package being sent out to developers for testing and validation, and shows what we might be able to expect from the new discrete Intel graphics card… if it does ever make its way out of the labs and into a form factor we can jam into our desktop PCs.

Honestly, I’m not convinced the DG1 will find a home outside of mobile, more likely to be paired up with low-power processors for thin and light laptops with a modicum of gaming performance. Though if the multi-GPU potential of teaming the DG1 with the integrated Xe graphics of Tiger Lake actually becomes less myth and more reality then we might get some skinny notebooks with more than just a modicum of gaming chops.

Twitter user _rogame has dug up the 3DMark results and shown the benchmark in comparison with an engineering sample of a Tiger Lake U CPU – itself sporting Xe graphics – as well as the AMD Ryzen 7 4800U and 4700U. The Intel DG1 Xe GPU is the top performer out of those three in terms of the overall graphics score – if only just – but it’s the detailed results that arguably make for the most interesting reading.

The tweet points out that the performance is markedly different between the four separate graphics tests in 3DMark 11, with the first lighting/shadow-based test the weakest of its test, falling behind both AMD APUs. But the other three tests, all of which specifically use tessellated geometry, show performance often well ahead of the competition.

Interestingly the benchmarks for the Tiger Lake U engineering sample are well off the pace, even though the DG1 is supposedly using the same core configuration as the integrated graphics of the Tiger Lake CPUs. This is likely due to a combination of factors – early drivers, slow clock speeds, and weak memory being just a few of them.

Intel has been very up front about the performance of its DG1 cards, showing the Intel Xe SDV running Warframe at 30fps on Low settings at 1080p, so we already know not to expect Nvidia-slaying frame rates from Intel’s first discrete GPU. But there’s definitely something interesting going on inside the Xe silicon judging by its seeming propensity for tessellated geometry.