Intel’s gaming-focused Xe DG2 GPU is expected to release next year, and could bring some more variety to our currently two-branded best graphics card guide, if its performance is up to scratch.

The card is expected to come with up to 512 execution units at a rumoured cost somewhere between $400 and $600, and this top-end model looks like it has the capability to trounce high-end cards like Nvidia’s RTX 3070 and AMD’s RX 6800 if a new video from Moore’s law is dead is anything to go by. The footage includes photos of a Xe DG2 engineering sample, which is purportedly the best one Intel has to offer.

With a dual-fan design, we also get a glimpse at an eight and six pin power connector, which suggests the GPU will use somewhere between 225W and 275W of power. For reference, Nvidia’s RTX 3070 maxes out at 220W, with AMD’s RX 6800 rated for 250W. The YouTuber also claims that in the DG2’s current form, the performance fits somewhere between the 3070 and 3080.

The report says the DG2 won’t be ready for consumer release until 2022 at the earliest, so we’ll have to wait to see if Intel has enough performance to disrupt the Nvidia and AMD duopoly. The claimed 16GB of GDDR6 VRAM is the same as AMD’s RX 6800 and six more than what’s inside the RTX 3080, which could trump team green – but, there’s more to a GPU than just memory, and the 3080 uses faster GDDR6X RAM. 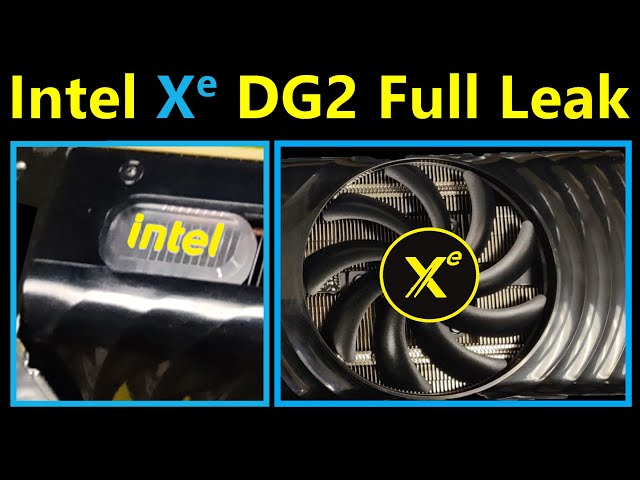 It also quotes a source stating that the 512 EU DG2 “should be treated like an RTX 3070 Ti” – a GPU that also hasn’t been revealed yet. Just like AMD’s upcoming FidelityFX, Intel’s also rumoured to be working on its own supersampling alternative to Nvidia’s excellent DLSS technology, codenamed ‘XeSS’.