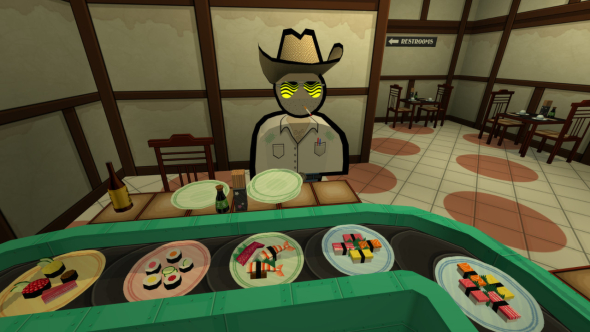 It’s always nice to get whatever the opposite of a delay is. Jazzpunk’s Director’s Cut took to Steam a day early last night – a “surprise” courtesy of co-developer Luis Hernandez.‏

Original story June 12, 2017: There aren’t many games that give themselves over wholeheartedly to comedy, but Jazzpunk did that. An oddball first-person adventure game set in a world of corporate espionage inhabited by cardboard cutouts, this game was incapable of taking itself seriously.

Our Matt gave its interactive stand-up a polite round of applause back in 2014. Since then, it’s been to the PS4 as a Director’s Cut, and is now on its way back to us with all the extra bits – plus an expansion named Flavour Nexus.

“We started working on Jazzpunk way back in 2007,” co-developer Luis Hernandez told Kotaku. “It’s crazy to think, a decade ago! Unity didn’t exist at the time, and there was barely an indie scene to speak of outside of a few titles (Braid, World of Goo being the two big ones).”

The Director’s Cut incorporated cyberpunk segments that didn’t make it into the game in time for its original launch, as well as jokes the developers consider to be among the best in the game. Flavour Nexus, meanwhile, adds a “lost chapter” to the original story of sort-of-secret agent Polyblank.

“As is the nature with comedy games, I can’t reveal too much without spoiling the jokes,” said Hernandez, “but we do have some Vehicular Combat in there as one of the gag modules.”

The new, chunkier Jazzpunk will come to Steam on June 16th.