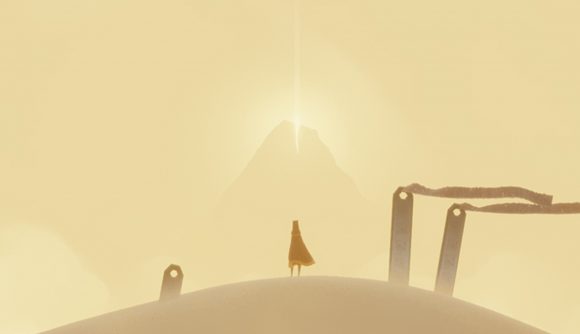 Back when the Epic Games store was announced, in that brief window before vocal parts of the internet became enraged about timed exclusives and a lack of feature parity with Steam, a PC port of Journey was a headline feature for the store. Now, that port is on the eve of release and it’s going to be very cheap as a result of the Epic Games store sale.

Journey launches on June 6 for $14.99 USD. Until Epic’s sale ends on June 13, you get $10 extra off of any game that’s $14.99 or more. Thus, Journey will be available for $4.99 until one week after launch. The discount also applies to to pre-orders, which are now available on the Epic store.

The Epic store has already hosted another Thatgamecompany title with Flower on PC, though that game was also available on other stores like Steam and GOG. Journey, however, looks to be an Epic exclusive for now.

Epic has also had a hand in bringing other former PlayStation exclusives to PC with the Quantic Dream collection coming over the next few months.

Journey itself is a modern classic that’s well worth playing however you get it. If you missed it on PS3 or PS4, this is a cheap way of making up for past mistakes.