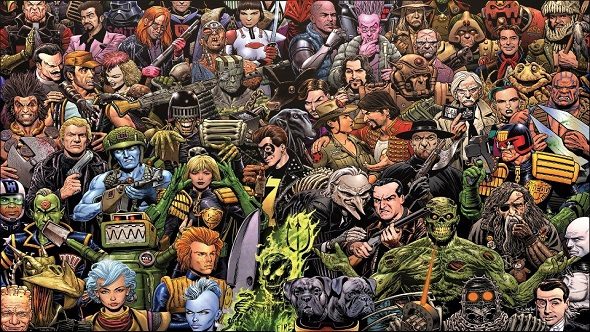 Announced at 2000 AD’s 40 year celebration in Hammersmith yesterday, game developer and holder of the 2000 AD license Rebellion have revealed that they will begin to let out the comic’s massive catalogue of characters for other developers to use.

Come inside Rebellion with our closer look at the long running British studio.

Speaking to Bleeding Cool following yesterday’s event, Rebellion’s CEO Jason Kingsley said that he wants “to work with other game developers and give them freedom to expand on the 2000 AD library”, even allowing the use of characters like Judge Dredd by other studios. While Rebellion do have a big 2000 AD related announcement coming later this year to celebrate 40 years of the comic, the company feels they “are leaving too many classic and exploitable properties on the shelf.” In our own chat with Kingsley back in January, he stated that Rebellion “want to make sure that the right games get made,” so this licensing effort should ensure that suitable studios get access to the right characters.

There has been a dearth of 2000 AD related games in recent times, with the last game being the polarising Judge Dredd vs. Death from back in 2003, where you could famously arrest people for the crime of being too fat. With stories like Judge Dredd, Rogue Trooper, Necronauts, Strontium Dog and the ABC Warriors ripe for the picking, I do hope that developers take Rebellion up on the opportunity to use its characters.

Hopefully, the studio have learned from the example set by Games Workshop, and will be a bit more selective when it comes to licensing its franchises. While the liberal licensing of the Warhammer universes has lead to some great games like Total War: Warhammer, Space Hulk and the upcoming Dawn of War III, the sheer number of games of varying quality can dilute the power of the license.

Kingsley admits that he’d love a studio to “do something with Mega-City One’s Helltrekkers”, so get in touch with the studio if you are a developer looking to create something cool with the 2000 AD franchise. While he doesn’t expect an avalanche of takers, Kingsley expects “four to five games possibly developed from other publishers in the near future”, should studios want to use a particular character. Fingers crossed for a Rockstar-developed Judge Dredd game.