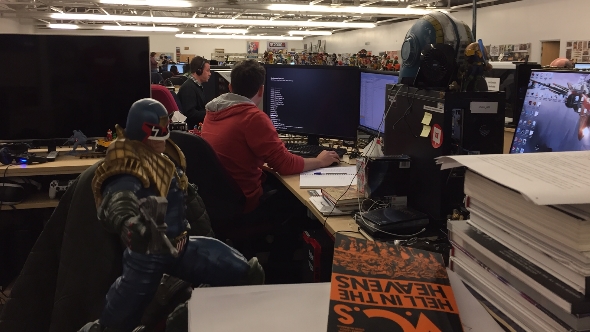 You’ll be familiar with Rebellion, the UK-based developer behind Sniper Elite, NeverDead and a couple of the Aliens Vs. Predator games. If you know your way around a comic book store, you might also know the same company owns 2000AD, the publisher behind Judge Dredd and Rogue Trooper. If you’re suddenly confused as to why there aren’t more Dredd games in the world, these words from company CEO Jason Kingsley may clear things up a little for you: “It’s relatively easy to raid books and comics and plunder them to make games, but we felt that we owed it to ourselves to come up with original things as well.”

Like Rebellion’s games? Check out our thoughts on Sniper Elite 4.

It’s a position that seems a little odd at first, since owning 2000AD is very clearly a license to print mega-money. But Kingsley, who co-founded Rebellion with his brother Chris in 1992, has a good reason for not jumping on the world of Dredd for his games. “Rebellion is an independent creator of ideas,” he explains. “When we bought 2000AD, we didn’t want to be the guys who did the 2000AD games.”

That’s why you’ll probably primarily know Rebellion for their Sniper Elite series. But there’s no reason to believe that a Judge Dredd game won’t come out of the Oxford studio in the future. “My brother and I see ourselves as the guardians of 2000AD,” says Kingsley, “much more than the owners. We want to make sure that the right games get made. We’ve got some plans that hopefully will be announced next year (the company’s 25th anniversary and 2000AD’s 40th) about how we can make more games in the 2000AD sphere. So watch this space! As a 2000AD reader and fan I want to see more games in that space, too” 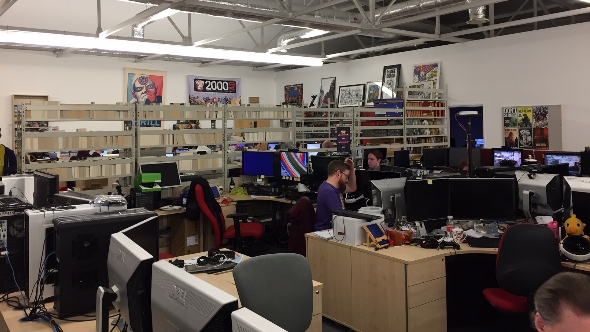 Rebellion’s HQ is a huge warehouse-like structure in an unassuming area of Oxford, just off the bank of the Thames. Decorated with a multitude of Judge Dredd posters, Sniper Elite concept art, and a variety of other design documents, the open plan studio floor is home to hundreds of employees. Invisible lines divide them into teams like the Sniper Elite 4 developers, the Q&A department, or the newest squad that makes up their publishing wing. “We are now a publisher, as much as I don’t like using that phrase!” laughs Kingsley.

Sniper Elite 4 is the first game that Rebellion have made, start to finish, on their own. From concept to publishing, they’ve controlled everything. It’s something the Kingsley brothers have been working towards since they set up the company. “We’ve always wanted to make our own games,” Kingsley says, noting that there were numerous restrictions they had to battle with back when they did work for hire. “It’s really nice to be in a position now to do our own stuff,” he smiles. “We don’t have anybody else to blame anymore. So it’s more risk, but there’s plenty more reward at the end of it.”

“It’s nice to be in a place where we’re making a proper big game that’s coming out and going to be played by people around the world,” he says, breaking his English modesty for a second to display some well-earned pride. “That’s a hugely important British success story, I think.” Considering the turbulent nature of the British economy over the last decade, it’s certainly no small feat.

One of the most important aspects of setting up a new company is the name, and ‘Rebellion’ is quite a striking one. With the name painted in red mimicking to the logo of the Solidarnosc trade union who brought down Poland’s communist government in 1989, the graffiti style is supposed to convey the developer’s individuality.

“We wanted a name that reflected a slightly unconventional attitude, because we didn’t just want to follow the path of other people. We wanted to do our own thing,” recalls Kingsley. “The name Rebellion means trying to throw away the old rule book and start again. And that’s where we really came from.”

He does note that there is a downside to the name, though. “As you grow as a company and start talking to the banks or the government, being called Rebellion is always slightly embarrassing because it sounds so anti-authoritarian,” he laughs.

Part of the Rebellion ethos is to – well, to rebel against conventional thinking. A huge amount of games made today have their roots in player surveys and user analysis, but Kingsley rejects that. “Market research is very valuable and a sensible thing to do, but I can’t get excited about making a game that I don’t want to play,” he says. “Fundamentally we want to make games that we want to play.”

Kingsley himself is a huge RPG fan, and spends plenty of time during our interview enthusing about his adventures in Fallout and Skyrim. “Most American CEOs who I talk to are amazed that I actually play games,” he smiles. “For most people in senior management, that’s what they do: they do senior management. But fundamentally my brother and I are game players and fans.” 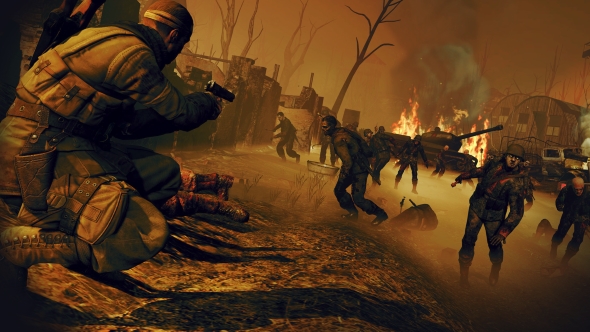 Rebellion have, for the last decade, been pouring their passion into the Sniper Elite series. Along the way it span off into the Nazi Zombie Army games, a series that was born out of a tech experiment. “We wanted to see how many creatures we could have in the environment,” Kingsley recalls. “I said to somebody ‘Why don’t we make them zombies?’ The great thing about zombies is if they’re really stupid nobody cares. Nobody says ‘Your zombie AI is rubbish.’”

With the tech developed and a variety of Sniper Elite enemy models dressed up in gore and mud, the original demo was passed around the studio. “Everybody played it for the first time and they all looked at each other going ‘Wow! This actually really works! We have to make a game of this’” says Kingsley. And so a trilogy of grindhouse-inspired horror shooters was born.

The near future belongs to Sniper Elite 4, but beyond that Rebellion have plenty of ideas. Aside from being “certain” that they will do something with 2000AD in the “medium term”, Kingsley is mindful of their other IP. “We’ve got things like Evil Genius we desperately want to come back to,” he says.

But Rebellion clearly pride themselves on making new IPs, and Kingsley hints that they’re quietly working on something fresh. “There’s a lot of ideas bubbling around about a gentle science fiction that we’d like to cover,” he says. 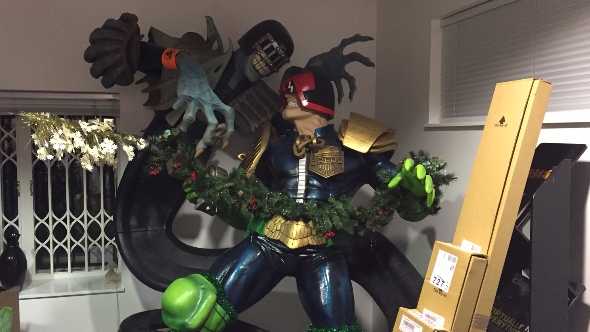 “Aliens vs Predator was a big success for us, but that’s owned by 20th Century Fox so we can’t do that without getting involved with them,” says Kingsley. “They’re a big company and we can’t really be bothered when we’ve got so many staff of our own. So could we do a science fiction thing ourselves? The answer is yes, if we can find the resources.”

Finding those resources can be a struggle, though. “We’re a big company, but not big enough to do everything we want at the same time,” Kingsley admits. “We did the Dredd movie, but because of the timings around it there wasn’t time to make a game based on it.”

“We’re only just over 200 people, so we can only really work on two games at a time,” he adds. “I don’t want to get up to 500 members of staff and become a faceless organisation. [Being] the size we are means everybody matters. Beyond 300 or 400 staff, people become cogs in a machine, and I’ve never really enjoyed that. I would have to become a suit and tie and fire people by pointing at them!” he laughs.

Recently Rebellion have been involved in the hugely exciting world of virtual reality. As children Jason and Chris Kingsley played the Battlezone arcade game, which required you to look into a periscope in order to control a virtual wireframe tank. Kingsley claims it was very influential on his decision to make games, which will explain why Rebellion’s first VR title is a reboot of Battlezone.

“It’s nice to come full circle. We’ve been able to revisit it and have it be so massively successful,” smiles Kingsley. He’s pleased that his aim for the game paid off: “One of the things we were trying to do with Battlezone was to make sure we made a proper game that was in VR, as opposed to making a demo for VR.” In a world of VR ‘experiences’ that have little depth beneath the initial wow factor, that makes Battlezone stand out. 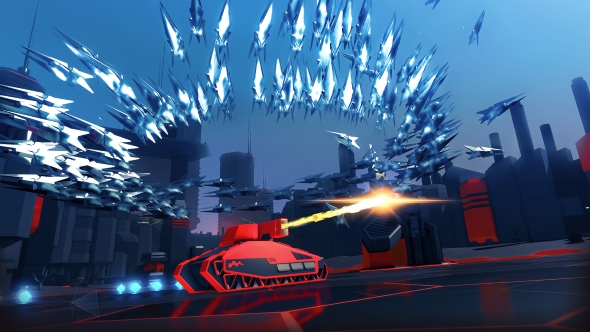 The game is currently a PlayStation VR exclusive, but will eventually come to Steam. Developing Battlezone has clearly had an effect on Kingsley, who enthuses about the experiences it offers that can’t be delivered elsewhere.

“Imagine putting on your VR goggles and looking around Stonehenge. That’d be worth it, I’d love that!” he says. “You could wind back time. You could visit Stonehenge before the stones were in place, when the early parts were there. Then wind forward and see people building the stones.”

He thinks there’s much more to VR than just games, too. “There’s a whole thing called the tourism industry and it doesn’t involve shooting paintballs at people when you’re going around the Maldives,” he laughs. “I think VR can allow us to do that as well.”

In Kingsley’s office stands a tall, polished suit of armour. A sword leans against the back wall, and on the table scattered around my dictaphone are the tips of lances. Not only a history buff, Kingsley is a keen jouster and partakes in reenactments. I ask if VR could help regular people experience the thrill of jousting.

“I know what it’s like to wear a helmet and to joust and to hit someone with a big stick, but for most people it’s an unusual and unique thing,” he says. “I think it’d be really interesting to do it. I’ve got to work out what we do next in VR, but a jousting game could be quite interesting. VR’s fantastic. It’s terrifyingly immersive at times, almost too immersive in some ways.”

The idea of saddling up in true first-person perspective and galloping towards a lance-wielding horseman is certainly something to get excited about. And even if Rebellion aren’t the ones to do it, it surely can’t be that long until someone realises medieval combat and movement-based controls are a perfect blend. 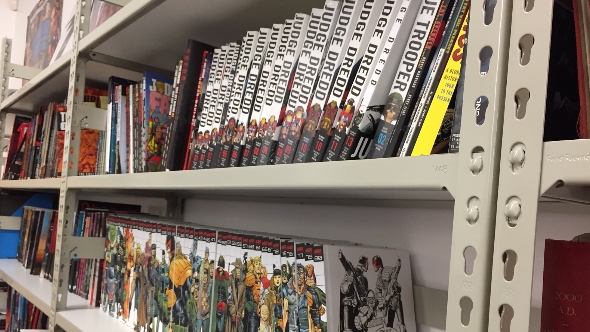 2017 is Rebellion’s 25th anniversary. Kingsley is, understandably, quite proud of the sizable business he and his brother have created over a quarter of a century. Under the roof of the Oxford building live a developer, a publisher, a comics division, and two of the best mid-scale book publishers (Abaddon and Solaris) in the country. “Through thick and thin we’ve kept our workforce going, and we’ve worked hard to maintain our integrity as a company,” says Kingsley.

As the company has grown, so has the quality of its output. From what I’ve seen, Sniper Elite 4 is the best game in the series, which contributes to an overall feeling that Rebellion are a company constantly moving forward and improving. The studio’s glory days are certainly not behind them. And should they maintain their current momentum, they’re a company whose best days will continually be in the future.