In the UK, the BBC has a long-standing policy of pushing all of its unsuitable programming behind a late night watershed. But for the most brutal and backstabbing scenes in British telly, you’re better tuning in during the daytime.

Want to make frenemies? Why not pick a great co-op game from our list?

In the game show Golden Balls, for instance, the final two contestants are each handed a pair of shiny spheres – one marked ‘Split’, the other ‘Steal’.

The players know that if they both choose to split, they’ll divide the jackpot down the middle. But, if just one decides to steal, that contestant will take the lot. It’s tantalising, and therein lies the risk: if both steal, everyone goes home with their pockets empty.

It’s a forgotten corner of game design that feeds on the conflicting human instincts for cooperation and competition. And it’s exactly where Jump Stars creators Pixel Blimp have looked to for inspiration.

“A good party game has definitely got to toy with the people you’re playing with,” says Isaac Howie-Brewerton, director of the Brighton studio. “We want you to work together, but we encourage you to screw your friends over.”

In Jump Stars, a manic host no longer able to secure funding for his game show has cut out the middleman by simply kidnapping his contestants. In an echo of another devious UK game show, the Crystal Maze, four players must collaborate across four stages to earn their place in a final round. And if they successfully run the Gauntlet, there is no prize pool but their freedom.

Though every round is a self-contained minigame, each controls like a 2D platformer. Jump Stars first evolved from a game jam themed around – yes – jumping, and while the first prototype starred four cubes rather than the chunky cartoons Pixel Blimp have now, “that basically spawned the idea for the entire game”.

Iterating rapidly in Unreal Engine 4, the studio built plenty of prototypes – eventually settling on ten that fit the concept. They’re all simple affairs, with the potential for betrayal. In Stump, you dive out of the way of four huge crushers – or shunt your friends beneath. In TNT Tag, one player is strapped to a bomb, which they must pass to an unwilling substitute. 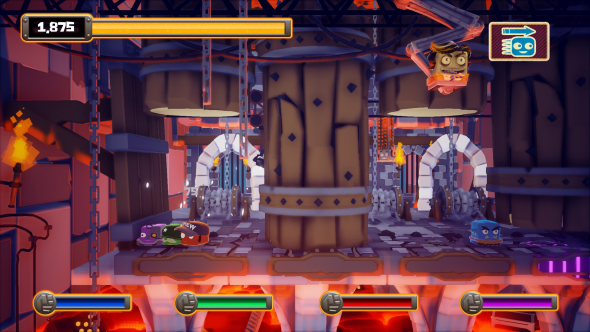 Meanwhile, in Cool Aid, everyone’s on fire and slowly dying. Only a cramped cool spot can slow their demise, and in an effort at group survival, charitable players tend to allow their worst burned comrades more time in the cold. But they soon realise that standing space is limited.

“As it becomes more frantic, it gets to people just punching each other out of the way,” laughs Howie-Brewerton. “‘No, I’m not going to let you in now.’”

In each game, players are cooperating to secure enough points to reach the Gauntlet – while coveting an individual high score. It’s a dynamic that means teamwork eventually gives way.

“They can work together as long as they want, but there is a cut-off point where you want to be the last person alive,” Howie-Brewerton advises. 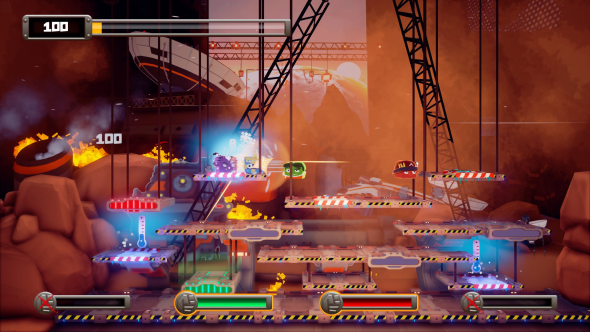 In the last two minigames before the Gauntlet, it can get “really, really tight”. By that stage, you’ll see one player pulling significantly ahead, or maybe dropping way behind. But Pixel Blimp have learned from the masters of party games: Nintendo. In Jump Stars, nobody is ever completely safe or out of the game until it’s over. Call it a Blue Shell mentality.

“We built it so it’s just as easy to come back from the bottom to the top,” says Howie-Brewerton. “If you are behind you still have that chance to get right to the front.”

The Gauntlet is the real test – a mix of all the mechanics players have learned in the minigames. Here players are separated out on-screen into their own separate trials, and Jump Stars becomes an endurance race in which personal skill can push any player into the number one spot.

It’s perhaps that potential for skilled play that will sell PC gamers on the idea. It’s not a given; party games haven’t traditionally graced our platform. But when so many households have an unused 360 controller or two kicking about, Howie-Brewerton sees no reason why we can’t join in. 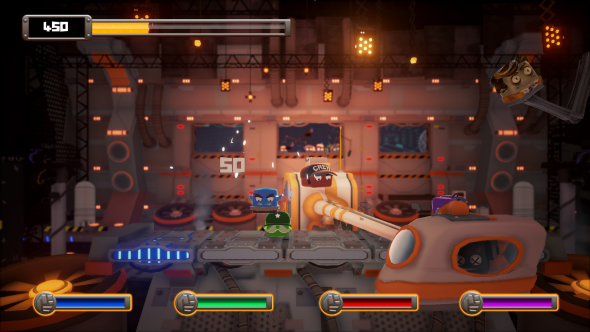 “I think that we’re definitely going to start seeing more of them,” he predicts. “People definitely have the capability to play them, and as long as developers are smart about their keyboard input then the PC is just as perfect a place for party games as console.”

Jump Starswill be published by Curve Digital on PC this December.Unreal Engine 4 is now free.

In this sponsored series, we’re looking at how game developers are taking advantage of Unreal Engine 4 to create a new generation of PC games. With thanks to Epic Games and Jamit Games.