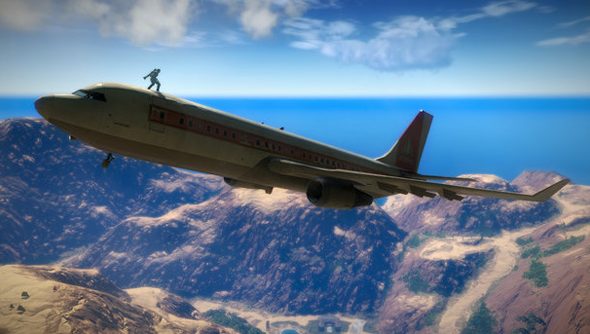 Since GTA swapped out its absurdist streak for reluctant antiheroes and (admittedly astonishing) recreations of the famous American cities, some of us have adopted a new refrain. No room for a second passenger on the wing of my biplane in GTA V? Just Cause would’ve managed it. No provision for hopping from one chopper to another? Just Cause would’ve okayed it.

Free from commitments to tone or world-building, Just Cause 2 allowed for every YouTube-friendly open-world stunt ever misconceived. Everything but GTA Online-scale multiplayer. But even that’s now been taken care of by a capable community.

After a series of compellingly chaotic open betas, the JC2-MP team enacted radio silence in August. They finally broke cover yesterday to announce the “big surprise”: their mod will enjoy full Steam integration on release, including friends list functionality.

The dev team have made no mention of price. It’s more likely that JC2-MP will join the growing number of free mods supported on Steam, which most notably includes Arma II’s DayZ. Players will be able to download the client and server from the ubiquitous grey platform, “just like a normal game”.

The final beta test for Just Cause 2 multiplayer will run from 8am GMT December 7 to the same time December 14. For the time being, Steam keys are available only from the mod’s site. They’ll unlock automatically on Saturday morning.

“Of course, before we release, we need to ensure that 0.1.0 is rock-solid,” write its developers. “This beta test will let us work out the final issues, and give everyone a chance to play in the biggest demonstration of chaos this year.”

A release date will be announced immediately after the beta.

“One thing is for sure, though,” conclude the team. “Come hell or high water, JC2-MP is coming out this year!”

I do rather like the idea that 600 duplicate Scorpios grappling and exploding their way about the tropics is something that can be supported by PC gaming’s biggest advocate. How about you?