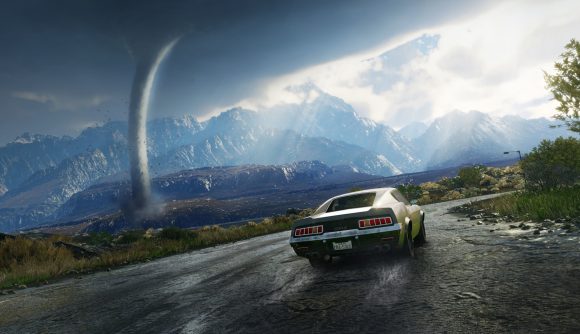 Just Cause 4 launches in little over a month, and as with any new game in 2018, that means it’s time to start talking about DLC. Avalanche and Square Enix have offered only the vaguest of details on what to expect up until now, but a new trailer shines a little bit of light on what to expect from that post-launch content.

Don’t expect too much detail, though. The 30-second trailer is all quick flashes of unclear scenarios, like people running from a crowded highway or a jet about to crash into a small town. It all looks very apocalyptic, though there’s no clear indication of what’s causing the end of the world. Maybe zombies, maybe viruses, or maybe the ridiculous, explosive shenanigans that Rico is generally known for.

The expansion pass covers three DLC pack releases: Dare Devils, Los Demonios, and Agency Strikes Back. The first is set to launch in 2019 and will feature “insane stunt-powered destruction derbies” while the other two will follow with “unprecedented levels of danger” and battles against an “unexpected, fierce enemy.“

The price for the DLC alone has yet to be confirmed, though the Gold Edition featuring the expansion pass and a few other digital goodies along with the game is available for $30 more than the standard price.

The Just Cause 4 release date is scheduled for December 4, marking one of the last big releases of the year. You can follow that link for much more info on what to expect from the upcoming game.