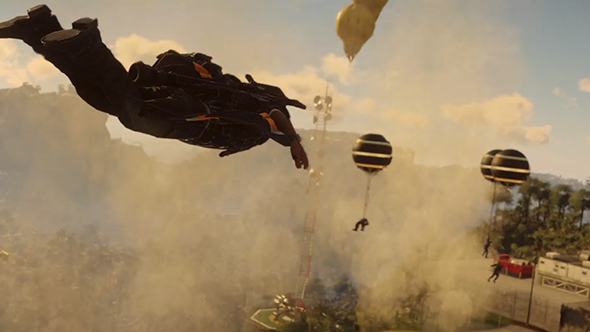 A new Just Cause 4 trailer has been revealed at Square Enix’s E3 2018 showcase. As well as giving us a better look at the game’s destructive weather systems, the new footage also tells us that the next sandbox is called Solis and will be the series’ biggest yet. It also looks as if Just Cause 4 will feature more wildlife than previous games in the series, which makes sense given the setting.

Tornadoes will also feature in the game, and can destroy trees and bridges, pulling up massive structures and even enemy vehicles into their cyclone of doom. Thunderstorms are another threat in the new Just Cause 4 reveal, though it’s not as clear what threat they pose to players.

After more action-packed games like Just Cause 4? Go ahead and wingsuit over to our list of the best sandbox games on PC.

Watch the gameplay reveal below.

In addition to this, the official Just Cause YouTube channel has released a short video going over some of the mechanics shown off during Square Enix’s E3 2018 showcase. Watch it below.

And here’s an 11-minute breakdown by the Just Cause team.

One very interesting snippet from the above video is about the types of weapons you will be using in Just Cause 4. Many of Just Cause 4’s weapons will feature an alternate fire mode, such as an underslung grenade launcher on an assault rifle. Also expect burst fire, mid-flight control on rockets, and explosive bullets.