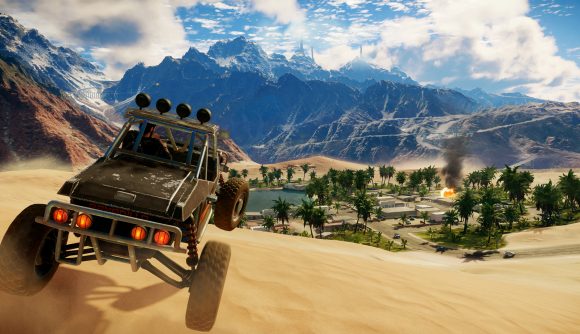 Just Cause 4 system requirements are here. The latest destructive adventure for Rico Rodriguez launches in December which is now, astoundingly, next month. So if you’re rushing to get your PC in line for some sandbox explosions, Avalanche and Square Enix have happily obliged – and we’ve got you covered with the full list of specs.

Even if you managed to play Just Cause 3 alright, the fourth entry might push you toward an upgrade – at least if you want to go beyond the bottom options and crank up the visual experience. The 2015 game already had some stiff CPU requirements if you wanted to get the most out of the robust (and ridiculous) physics simulation, and Just Cause 4 is no exception.

Take extra note of that hard drive requirement if you’re going to play in 4K. Since it’s not exactly the same as the other sets of requirements, that may mean we’ll see an additional 4K texture pack – though such speculation remains to be confirmed.

The devs are quite proud of what they’ve achieved. In the reveal announcement for these specs, they say “the highly evolved Apex Engine allows us to squeeze every last drop of power from PC hardware. Incredible visuals, unparalleled physics, full freedom, and a brand new toolset are joined by the most interactive, extreme weather simulations you’ve ever seen in a videogame.”

When the Just Cause 4 release date hits, we’ll see just how well those boasts play out. The game’s certainly looking impressive so far, and you can follow that link for much more detail on what Avalanche has in store.

Can you run it? Check your PC against the Just Cause 4 system requirements on PCGameBenchmark.