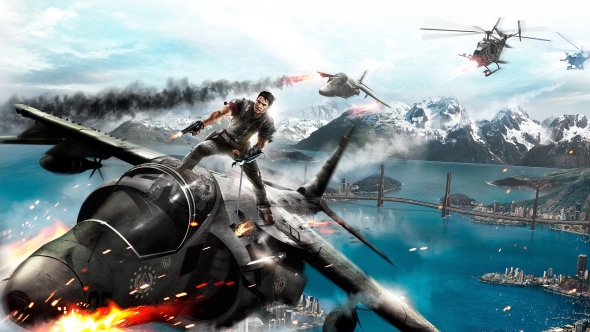 A series of Walmart Canada listings have potentially leaked the existence of several new games. The listings, which were posted by industry insider Wario64, and you can see below, reveal a number of as-yet-unannounced games.

Here’s everything we know about Just Cause 4.

Among the games reportedly leaked are Just Cause 4, Borderlands 3, Gears of War 5, Rage 2, and Forza Horizons 5 (although the last game in the series was Forza Horizon 3, and the name isn’t pluralised). If that wasn’t enough, there’s also Lego DC Villains, a new Splinter Cell game, Rage 2, and an unnamed Assassin’s Creed. There’s also Dragon Quest 2 for PS4 and Xbox One.

There have been rumblings of the existence of a few of the games, such as Splinter Cell, in recent months. Others, like Assassin’s Creed, are no real surprise. This is, however, some of the first information we’ve had about the existence of a new Forza Horizon game.

Almost all of the games on the list are priced at the same amount ($79.96) which could easily be a placeholder. There’s also almost no boxart available for any of the games on the list.There are also plenty of mistakes within the listings, so take almost all of this with a healthy pinch of salt, and several major absences – Watch Dogs 3 and Call of Duty: Black Ops 4 are both on their way, but neither appear on the list. There’s also not one original IP on the list – everything is either a direct sequel or part of a wider franchise.

Obviously this is just a (unverified) leak, so there are, really, very few concrete details. At this point, if they actually exist, it would be a reasonably safe bet to assume we’ll learn more about most, if not all, of these games at E3.