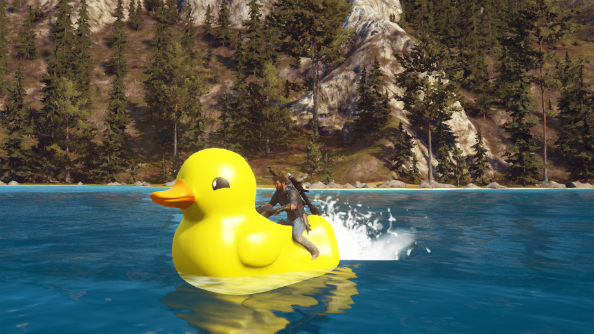 Medici is the real star of Just Cause 3. 400 square miles of pristine Mediterranean countryside, entirely open to players after the first 15 minutes of gameplay, without restriction or heavy-handed guidance. The second you’ve got some basic equipment and a handle on the controls the game sets you free to explore and explode to your heart’s content.

For more open-world carnage, check out the finest sandbox games on PC.

With so many games currently offering hundreds of gameplay hours, rewards for continued play and skill trees that keep you invested right up to the narrative’s end, it’s refreshing to come across a game that hands players the reigns so willingly. Sure, Just Cause 3 has systems and mechanics for upgrading the player’s tools of destruction, but they never feel necessary when you can topple a fortress with a couple of missiles and some deft use of the grappling hook. 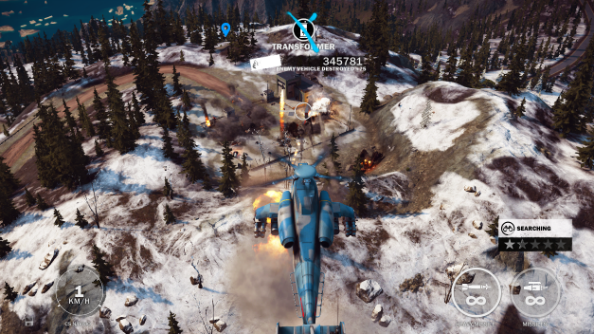 At the centre of it all is series protagonist Rico Rodriguez: revolution instigator, demolition expert… action hero extraordinaire. Rico is a man whose ability to cause mass destruction is surpassed only by his inability to process the consequences of said actions. Rain rockets down on a village full of civilians and you’ll get an inappropriate quip that only serves to emphasise how unconcerned Rico is with helping his fellow countrymen. And that’s fine, because in a game where I can derail a train, attach one of its carriages to a helicopter and use it as a wrecking ball, neither am I.

The narrative backdrop of overthrowing General Di Revello’s oppressive military regime exists for the sole purpose of supplying players with an endless gallery of certified baddies to shoot, run over, blow up, and tether to lampposts. Go into Just Cause 3 with the goal of completing the main narrative in mind and you’ll quickly get bored. Spend your time making your own fun, experimenting with the game’s simple but versatile physics-based mechanics, and you’ll find as many hours of ludicrous content as you want. 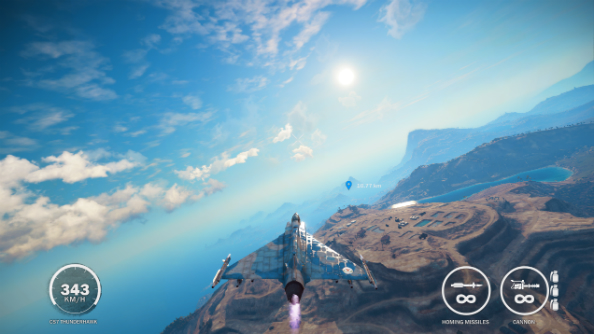 Those simple mechanics meld together seamlessly so that almost every minute of gameplay features a new way of destroying something. The pleasure of watching one simple action, like toppling an antenna tower or tethering a car to a building, cause so much mayhem is never-ending, and the sheer number of objects, tools and scenarios with which to experiment with ensures that there’s never a dull moment in Medici.

At one point I found myself flying a titanic transport plane into a radar spire. The jet exploded, the spire began to collapse and debris cascaded down onto the military base below. A moving truck was engulfed in falling wreckage before emerging from the cloud of fire and rubble ablaze. The flaming truck then crashed into a transformer (sadly not the “robots in disguise” kind), which in turn lit the scene with flashes of electricity and a chain of explosions that eventually resulted in several of Di Revello’s men being cast into the air… on fire. 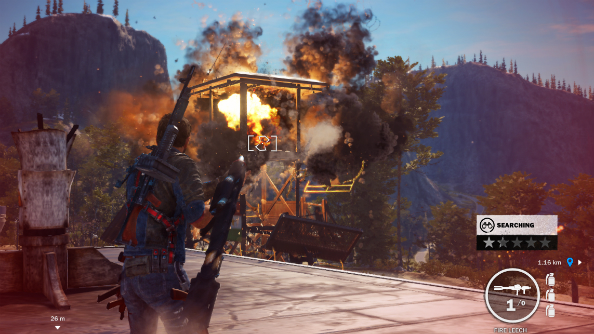 Several other incidents on a similar scale occurred simultaneously alongside this one. I watched them all, gliding peacefully into the apocalyptic scene that lay before me, readying my machine gun as I ditched my parachute and continued the rampage on foot. Here is a game with more brazen disregard for the necessary use of explosives than you’d expect to find in a Michael Bay directed George Bush biopic. It was beautiful, and it was happening practically every time I wingsuited my way into a new combat zone.

Hours go by without you even noticing, new ideas and self-made challenges constantly springing to mind; it’s triple-A development’s answer to Garry’s Mod. Taken on its own merits, Rico’s retractable tether doesn’t particularly delight. Sure, you can string vehicles up and topple towers, but the real hilarity starts when combining those elements with objects around the game world. Tether a goat to your car and use it as a makeshift (incredibly cruel) wrecking ball. Attach an enemy car to a helicopter and watch the two spin around at the mercy of their connected velocities, before one of them collides with something and erupts in a ball of fire, which of course quickly consumes the other. 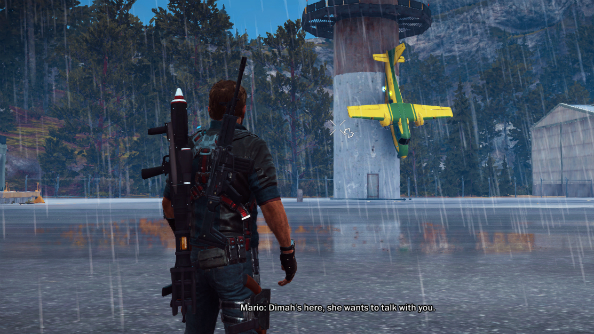 As you may imagine, I haven’t got very far into Just Cause 3’s story yet. My time with the game has mostly been spent trying to traverse a volcano with a tractor and driving around rural Medici killing animals and piling them into the back of a flatbed truck.For no reason. At all.

At some point I’ll likely finish the campaign and find the experience solidly mediocre. In the meantime the game will just have to keep me occupied, letting me do pretty much anything I feel like doing. That sense of freedom, that there’s nothing I can try that won’t result in at least a bit of slapstick comedy, is what makes Just Cause 3 such a consistently compelling experience. It’s not something that’ll linger on in my consciousness hours after gameplay, instead it’s a pick-up-and-play encounter that ends when I want it to. Imperfect, unoriginal, totally and completely fun.