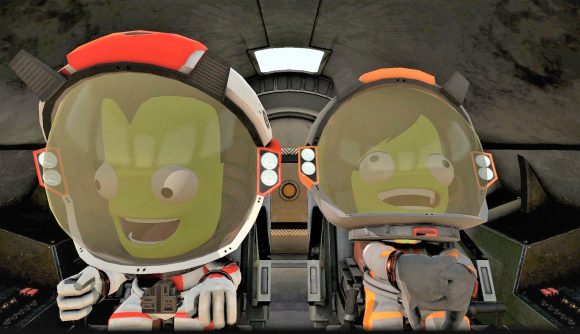 The Kerbal Space Program 2 release date has been pushed back again, developer Intercept Games has announced. Earlier this year, the space game’s launch was delayed until fall 2021, but now, however, that window’s been moved again, this time to sometime the following year.

“Gonna rip the band-aid off fast here: Kerbal Space Program 2 will release in 2022 instead of fall 2021,” the upcoming PC game’s creative director Nate Simpson announces on its forums. “I know this is frustrating, especially considering that this isn’t the first time we’ve adjusted our schedule.” Simpson goes on to explain that the reasons behind the delay tie into the “immense technical and creative challenge” the game’s team took on when starting development of the game.

“We’ve heard time and again from this community that quality is paramount, and we feel the same way. It’s not enough to deliver a bunch of new features – those features have to be woven together into a stable, polished whole,” the dev says in the post.

He explains that the KSP2 team wants to forge a “reliable foundation” for players and modders to use for “another decade or more”, which involves solving a bunch of tricky and new problems, and that this takes time. Simpson adds that the team will keep on posting screens, feature videos, and dev diaries to give fans an idea of what’s to come in the lead-up to its eventual launch. A new dev diary and feature video are due to arrive “this winter”, which means aspiring Kerbals will have some nuggets of news to lap up in the meantime.

Attention Kerbonauts, Space is indeed very hard. Please see a message regarding the release of KSP 2 which is now 2022
📖 https://t.co/vDl50eMwjS pic.twitter.com/RXd4rUb6Iz

There are also plenty of sandbox games for you to dig into as you await the next chapter for the Kerbals sometime in 2022.