If you’re even remotely interested in getting off this blue marble and exploring the galaxy, or are perhaps simply a big fan of Star Trek, then there’s a good chance you’ve heard of Harold White. He’s a physicist over at NASA, and he and his team have been exploring faster-than-light travel for the last couple of years.

This week, White revealed a ship design created with artist Mark Rademaker. The theoretical ship would be able to reach our nearest star system, Alpha Centauri, in around two weeks.

You can see how closely it’s modeled on the concept created by White and Rademaker, which in turn seems to draw no small amount of inspiration from the Constitution, Galaxy and Sovereign class starships in Star Trek. 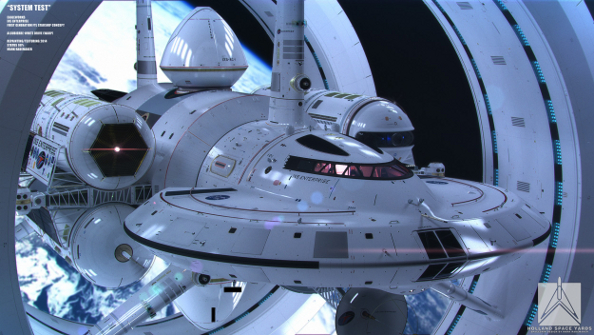 White and his team’s design would use a warp bubble, warping space around the craft, moving its position. This way, a vessel would effectively be able to travel faster than light without breaking Einstein’s Law of Relativity.

While Oldnumber007’s KSP recreation might be flight-worthy, White’s still in the experimental stage. The theory is plausible, in that it seems like warp bubbles can exist, but so far the data hasn’t provided any concrete evidence. The fact that NASA is even investing in such experiments and projects is immensely exciting, though.

With Galactic Civilizations 3, KSP, Star Citizen and Elite: Dangerous, even if travel to other systems won’t be possible in our lifetime, at least we can seek solace in games.