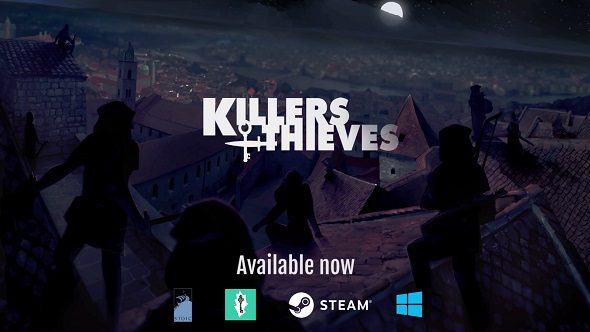 Stoic, the studio behind The Banner Saga series, have just launched an all-new game called Killers and Thieves. Appropriately, it kinda came out of nowhere. In it, you control your own thieves guild, manage its gaggle of cutthroats and pickpockets, then take them onto missions and watch your plans go awry.

Check our upcoming PC games list if you don’t want any more titles to sneak up on you.

This is actually more of a solo project from Alex Thomas, one of Stoic’s founders, though the studio did lend a hand with the game’s creation. You can tell it’s Stoic just from the bold, Disney-esque art style. Stoic also say the game shares some DNA with The Banner Saga, too – likely in how you’ll have to make some tough choices.

It’s not all about dialogue here, though – you’ll need to be clever when building your team, choosing your targets, and even when going on the real-time missions themselves.

“The heart of the game is the heist, featuring tactical real-time action as you control your crew as they break into buildings, dodge guard patrols, snatch everything valuable and then vanish into the shadows,” says the official blurb. “At least, that’s the idea; all too often, emergent gameplay factors will turn your carefully laid plans into a blood-soaked mess.”

Stoic say the world will react to your actions, with guard patterns shifting up and deploying counters to tactics you use too often. It looks like it’s going to be a challenge, then. See for yourself in the launch trailer above.

Killers and Thieves is currently $17.99 on Steam.