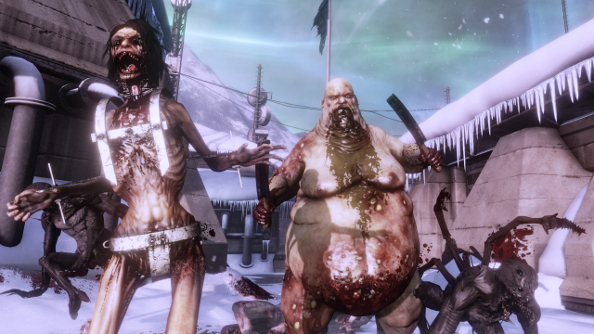 The human body contains about five litres of blood. That’s over a gallon, if you want to be all imperial about it. A hundred people contain around 500 litres of blood. That’s a lot of red. Now imagine all of it tipped out into one room, then smeared all over the walls and doors. Now you know what Killing Floor 2 looks like after a few minutes.

I started my first match with some skepticism. Killing Floor is obviously massively popular, and I remember countless people evangelising about Gears of War’s horde mode, so I know that wave-based shenanigans have plenty of adherents. I’m not normally one of them. My life’s got enough repetition. Then I popped my first zombie head. 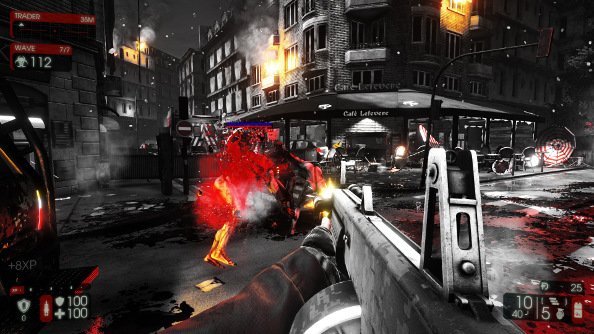 From the moment the trigger is pulled, till the bullet hits its mark, the journey is immensely satisfying. Embarrassingly satisfying, maybe. Killing Floor 2’s gruesome zombie destruction engine, charmingly called M.E.A.T., is the source of such gratuitous violence that it almost seems wrong to take pleasure in it. But they are zombies. And they are trying to destroy the world and, more importantly, trying to munch on me. It’s cool.

It’s the moments before a bullet inexplicably makes a head explode that make Killing Floor 2 compelling, though. I spent most of my time playing with the support perk, that’s Killing Floor lingo for class, which starts with, as a main weapon, a shotgun. It’s wild. Unleashing its powerful shots feels like an event, one that ends by punching holes through rotting flesh and a lot of kickback. The starter rifle, on the other hand, is a more subtle weapon. It can be set to automatic for those desperate spray and pray moments, but with hundreds of zombies wanting their dinner, it’s better to conserve ammo and change shooting mode. That’s when it becomes all about precision, waiting for the right time to hit the zombie in the right place – usually its brainpan.

Other weapons can be purchased with currency earned during waves – everyone can buy anything, but each class has a particular weapon type that complements it – along with ammo and armour. And each weapon type has increasingly expensive, but more effective, variants. 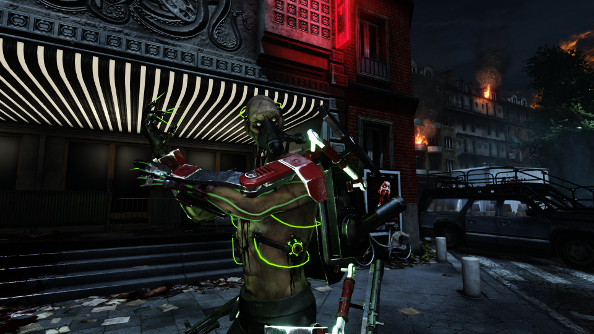 Slicing and dicing is also an option, with melee weapons ranging from stylish katanas to mean-looking knives. While they get the job done and carve up the undead nicely, it’s maybe a bit too slick. Blades go through zombies like a hot knife through butter. And even with some defensive abilities, swordplay just doesn’t seem like a great fit. You don’t want to get crowded by zombies, and running up to them with a big sword is a good way to find yourself right in the middle of an awkward zombie huddle.

With the large hordes of unrelenting undead foes and the inexhaustible supply of weapons and ammo (inexhaustible as long as you’re flush with cash), battles are quick, brutal mosh pits, which makes it challenging to sit back and just take a second to admire the enemy design, the feel of the guns, the fountains of blood – that’s why there’s Zed time.

Zed time turns the dial on time way down and drains all the colour from the screen after someone on the team gets an impressive kill. It’s random, and it affects the whole team, so it usually comes as a bit of a surprise. Time still moves forward, but at such a slow pace that you get this wonderful snapshot of the action. 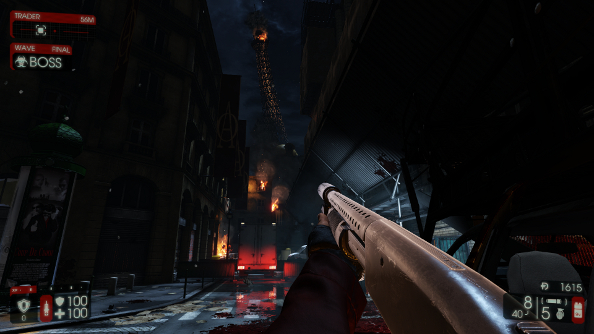 A bullet, inches away from a zombie’s face, slowly piercing the air; friend and foe locked in a brutal struggle, sword against chainsaw; an explosion of blood suspended in midair – then time returns to normal, a rude awakening accompanied by yelling, gunfire and frantic fighting. Those brief pauses offer a couple of seconds of respite from the chaos, but also a moment to get the lay of the land, to plan the next move.

Time can also be gained without messing with reality by sealing doors to temporarily block the zombie horde’s progress. They’ll hammer away at the obstacle for a while, and eventually break through, rendering the door useless, but the time they spend trying to get through is precious. They attack from all sides, so depriving them of one entry point is a serious coup, even if it’s just for a wee while.

Getting surrounded is inevitable, though. Zombies grabbing, jumping, biting, coming at you from all directions; it’s a bit blooming intense. “Calm down,” you’ll want to tell them, but instead some sort of weird spider mutant will bite your ankles and you’ll just end up swearing at it until a stalker zombie appears out of nowhere and eats you. 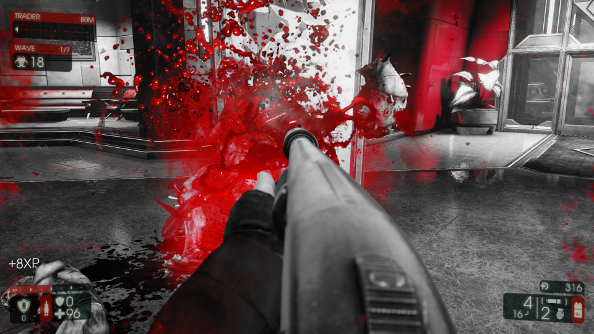 Killing Floor 2’s matches are made up entirely of those brilliant final stands at the climax of monster flicks, with the survivors standing back to back, unloading clip after clip as a tidal wave of horrible beasties rush at them again and again.