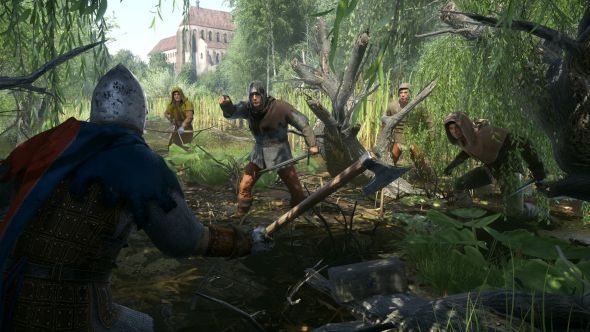 As I walk into the corporate Fleet Street venue where Kingdom Come: Deliverance is being demoed, I’m greeted by a warm and genuine smile. Standing before me is Warhorse Studios’ fair-haired PR manager, Tobias Stolz-Swilling, looking tired but triumphant. After five long years, Kingdom Come: Deliverance has finally entered internal alpha, meaning its main questline is now playable from start to finish. As Tobias boots up the game and begins our hands-off demo the look of relief on his face is almost palpable – at long last, this ambitious game’s development is coming to a close.

For the uninitiated, Kingdom Come: Deliverance is a medieval RPG set in 1403 in Bohemia – what we now know as the Czech Republic. Powered by CryEngine, Warhorse Studios’ debut aims to let players inhabit a stunning and historically accurate Bohemia, while giving them the freedom to choose how they play their character. Created by veteran developers behind beloved franchises like Mafia and Arma, the game enjoyed runaway Kickstarter success, raising over £1.1 million.

While there was a brief bout of basic public testing earlier in the year, this is the first time anyone will see a near-finished build of the highly anticipated game.

Our demo starts in the small village of Stříbrná Skalice, mere hours before it’s invaded. Unbeknown to our protagonist Henry, King Sigismund of Hungary has declared war on Bohemia, hoping to topple the region’s incompetent king. Ignorance is bliss however, and with the prospect of war merely a rumour in Skalice, Henry is commanded by his father to collect a debt from the town drunk, Kunesh.

As Henry runs through the village’s impressively rendered fields, what immediately strikes me is the complete lack of objective markers on-screen. Running about the village searching for Kunesh, players only have the vague directions from Henry’s father to go on. In this game, no characters are marked out as more important than any other, meaning players have to treat everyone they see as a potential person of interest. With no arrows or glowing NPCs to guide you, the only way to reach your destination is by memorising directions and talking to those around you, creating a more authentic role-playing experience.

“We wanted to make everything realistic, or at least believable,” Tobias explains. 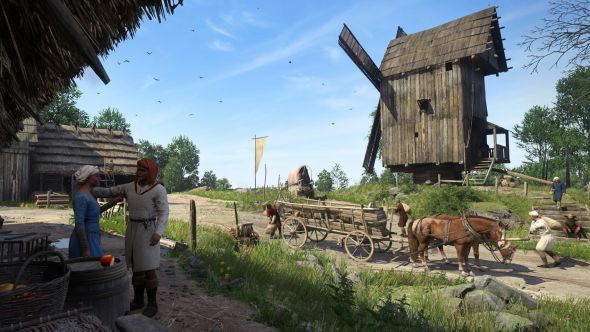 After bothering a few villagers, Henry eventually discovers a small house on the outskirts of the fields. A bearded behemoth of a man sits on a chair outside – Kunesh. Upon Henry’s approach Kunesh immediately recognises him and refuses to pay his debt. As you’d expect from an RPG, it’s up to the player to choose how they deal with the situation. Henry has three choices – he can either attempt to reason with Kunesh and persuade him to pay his debt, bloody his hands and try and beat Kunesh into submission or thirdly, go back to daddy and get help. Built like a ton of bricks and standing a good foot taller than our weedy protagonist, challenging the man to a fist fight probably isn’t the most sensible option.

Interestingly, how successful you are at the first two options depends entirely on how you’ve decided to act in the early part of the game. “In Kingdom Come: Deliverance you learn by doing,” says Tobias – and here that age-old adage is very literal. The simple act of engaging in conversation with people before finding Kunesh was enough to raise Henry’s dialogue skill. Testing his newfound speech skills, Henry attempts to reason with the burly farmer. Kunesh responds by laughing in his face. It seems his dialogue ability could still use a bit of work. With persuasion no longer an option, Henry can either risk combat or lose the respect of his father by going home and asking for help – so he opts for combat.

Raising his fists, Henry proceeds to duck and weave out of reach of incoming blows, bashing Kunesh with the palms of his hands. While hitting a foe with your palms may seem like an odd way of attacking, between trading blows Tobias explains that in 1403, warriors punched with their palms in order to avoid breaking their knuckles on their opponent’s armour. 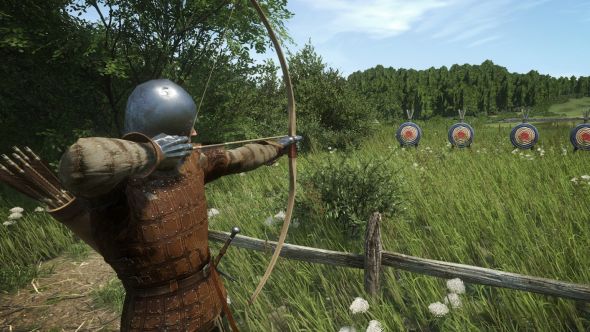 After an intense few minutes, Henry finally lands the knockout blow. Relenting, Kunesh admits that he has no money, but to settle his debt he allows Henry to enter his home and take whatever he pleases. When he’s finished ransacking Kunesh’s abode, Henry departs with his loot and takes a walk through the village, where he is soon approached by a gang of youths. Angered by a local villager, they enlist you to join them in their noble cause of throwing dung at his house. What seems like a fairly frivolous and unimportant quest takes on an entirely different meaning if you fail to beat Kunesh, however. If you take a beating and don’t want to face your father, helping out this gang will also get them on your side, recruiting them as your muscle against Kunesh.

It’s this sense of choice that permeates every aspect of Kingdom Come: Deliverance’s design. While Tobias is keen to stress the painstaking effort that went into the game’s historical accuracies, for many the real fun of the game will lie in molding Henry into whoever they want him to be.

“What we want to offer is the real role-playing experience, that you decided you want to become the bribing guy, the drinking guy – whatever. The fun part is you asking yourself, what would I do? What should I do? What’s the smartest way to do this quest?” 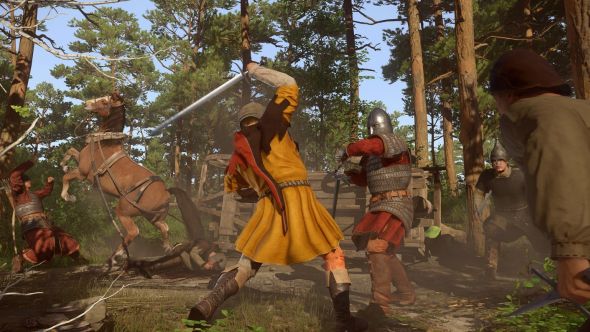 As is commonplace for the genre, the world of Bohemia responds to your actions. Being friendly and tipping shop keepers will net you a good reputation in the local area, giving you discounted wares. If you go around killing people instead and aren’t clever enough to avoid detection, however, word will soon spread throughout the region and you’ll find a price on your head.

While the odds will certainly be stacked against you, if you do dream of being a bit of an archvillain and attempt to take the world on, Warhorse Studios certainly have a solid combat system to help you try and achieve that. Thanks to their extensive research and advice from historians, Tobias claims that Kingdom Come: Deliverance has “the best medieval sword fighting in a videogame”. While I only got to see hand-to-hand combat during my demo, Tobias promises that sword fighting will be remarkably similar to how it was in 1403, relying on reading your opponent’s stance and lightning fast reactions.

Still, it wouldn’t be a true role-playing experience without the option to find a more peaceful solution. While there are certain battles in the game you can’t avoid thanks to historical fact, players can still choose to play the vast majority of the game without fighting at all. 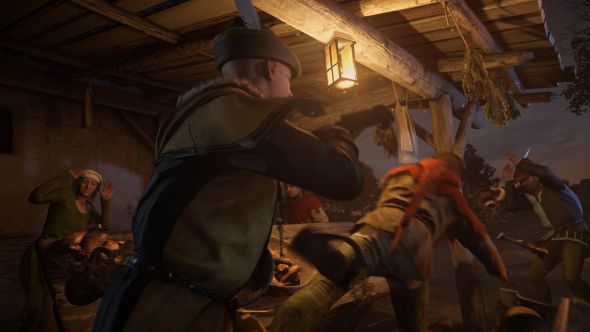 “You can bribe a lot, money speaks,” Tobias gestures, rubbing his thumb against his palm. “We want to offer a more realistic role-playing experience in terms of, ‘I am Henry and I am the dialogue king’. We want to let you make Henry whoever you want him to be.”

Yet where a true role-playing experience falls down is in the believability of its world. For Warhorse, it was important that it felt like no matter what actions you take, the world carries on without you.

“We have over 1,000 NPCs,” reveals Tobias. “These NPCs have daily cycles and [even if you can’t see them] they’re doing something on the other side of the map. Everyone’s doing their own things without your action. Even if you decide not to go on a quest, that quest will still happen.”

After a lengthy and uncertain five years of development, Warhorse Studios’ ambitious dream is close to becoming a reality. The demo we saw certainly shows a lot of promise, but with only a brief look at Bohemia and so many complex systems working in tandem, it’s still too early to tell whether the driven Czech developer can truly deliver what it claims.