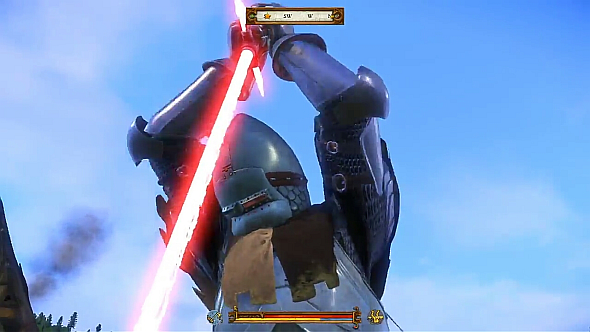 Kingdom Come: Deliverance is a game all about a sword. But why settle for steel when you could slay your enemies with a lightsaber? One member of the game’s growing modding community has delivered an upgrade that replaces its pointy metal with technology from a galaxy far, far away.

UblichenVerdachtigen’s mod replaces all longswords, short swords, and sabres with 14 different lightsabers for Henry and NPCs to fight with. Kylo Ren’s cross-guard saber is also apparently included, but seems to be harder to come by than the basic model. Sword fights are now Jedi duels, consisting of brightly coloured glowing sticks flying inches past your face as you desperately try to get to grips with the unique combat mechanics of the game.

The famously pleasing noise of “Vrummmummmmm FVISH” is yet to be included, so the original sounds of metal on metal are, confusingly, still used in combat. NPCs will also still try to break combos by grabbing their blade and hitting you with the hilt of their sword, seemingly oblivious to the fact that they have just melted their hand. On the plus side, there’s a nice touch that is visible only at night: look up, and you’ll notice that the moon has been replaced by the Death Star. The mod is also small in size and easy to install.

Until now, Kingdom Come’s modders have mainly focused on optimising graphics or fixing perceived design problems, such as allowing the player to save at any time. Certain combat mechanics and graphical effects are also being tweaked for those that want a more immersive experience, like getting rid of those annoying arrow trails. But among these, it’s always refreshing to see a mod or two intended solely for having a laugh.

You can grab the mod here.