Kingdom Come: Deliverance is an ambitious game offering you a tantalising buffet of activities with which to amuse yourself in 15th Century Bohemia. Built on the CryEngine, this new world has its sights set on being the new Crysis; a real powerhouse of a game. So the big question is: how does it run? That’s what we aim to answer with our Kingdom Come: Deliverance performance review.

Getting a pasting in battle? Brush up on our Kingdom Come: Deliverance combat guide in your nearest alehouse.

Layers of systems are making decisions and enforcing rules with each muddy step you take. Combined with the scale and beauty of the world, Kingdom Come: Deliverance can put strain on your average PC .That said, the game’s system requirements suggest it performs well on a less powerful rig. 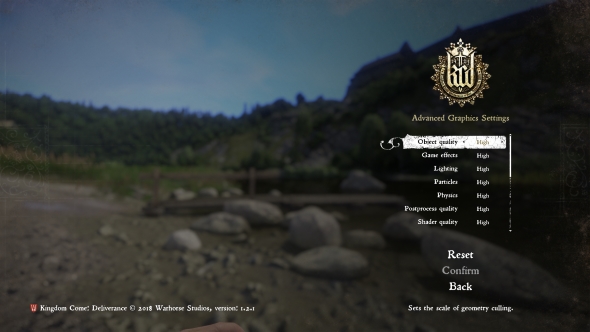 Kingdom Come: Deliverance’s graphics options are split over two menus: graphics settings and advanced graphics settings. In the former you will find all the simple stuff such as an FOV slider, five graphical presets (ultra high, very high, high, medium, and low) and even a frame counter. FRAPS functions without issues, although the game does warn of compatibility issues.

The advanced graphics settings offers 16 options including pretty much all the major ones you can think of. Not pictured in the above image are options to tweak shadows, textures, water detail, volumetric effects detail, vegetation detail, object distance, LOD distance, and vegetation draw distance. If you are planning on diving deep into these settings, we recommend upgrading or maintaining settings related to vegetation: Kingdom Come: Deliverance’s verdant, bucolic landscapes are breathtaking if your rig is up to it.

It is crucial to note that there is no option to disable VSync; for that you will have to use Kingdom Come: Deliverance console commands. When you are in-game, use the tilde key (or ¬ on non-US keyboards) to access the command console and paste in ‘r_vsync 0’ to remove the automatic 60fps cap. This option – as well as the opportunity to cloud save – are frustrating oversights.

Kingdom Come: Deliverance is a pretty game on each graphical preset, at least for the most part. The game can be a bit clunky and rough-around-the-edges, but it will often surprise you given its scope. There is very little difference between its presets, so much so that you might struggle to notice the difference when switching between them. In all presets you will probably encounter bugs and texture pop-in, although upcoming bug fixes promise to change that. That said, the game is currently riddled with plenty of problems despite the hefty 20GB launch day patch. 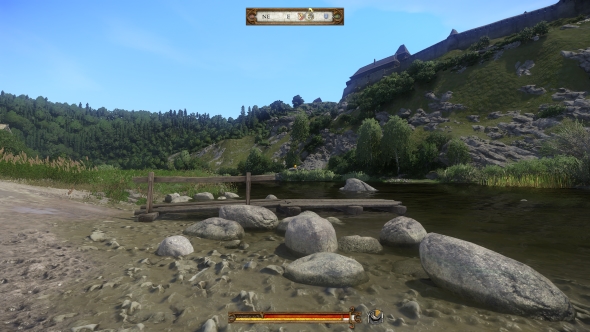 This screenshot taken using Kingdom Come: Deliverance’s highest graphics preset does not do the game justice. It is a game that needs to be seen in motion with the aural splendour of birdsong for company. Especially in this location, near where you are finally let loose on the world outside the town of Rattay.

You can see very detailed textures on the riverbed rocks in the foreground, with realistic mapping for an authentically bumpy surface. Less attractive greenery can be spotted in the middle distance but, on the whole, this is a game that shines in rural spots. Draw distances are impressive, too: you can pick out the bases of trees bunched together in the forested, hilly background.

When using a GTX 1060, you can unfortunately kiss goodbye to 60fps on this setting. Our testing resulted in a disappointing average of 28fps on ultra high, with a minimum frame rate of 18 and a maximum of 37. While Kingdom Come: Deliverance’s system requirements appear reasonably low, if you are looking to play on high settings at 60fps, be prepare to make room for a beefier card. 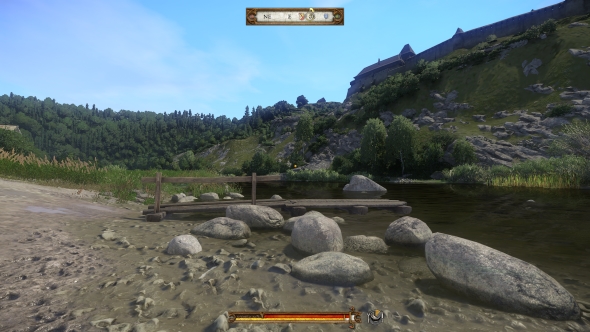 High settings is two presets below ultra high – Kingdom Come provides a very high setting, too – but largely any differences are tough to pick out. The textures of the rocky foreground are slightly lower resolution, and vegetation looks a touch thinner on the far side of the river. But, on the whole, the difference between high and ultra high is more than worth the frame rate boost: the average frame rate jumped from 28 fps to 41, with a 30fps minimim and a 52 maximum. It is still not the gold standard of 60, but, if your PC is unable to hack anything above high with an acceptable frame rate, do not fret. 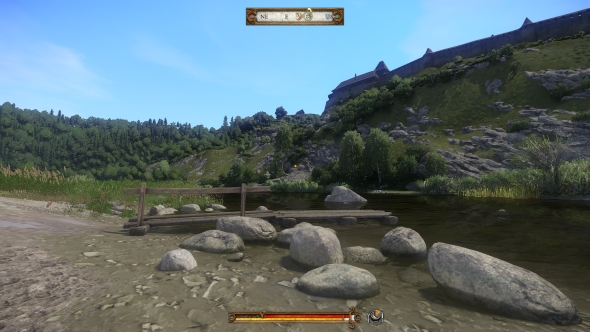 Medium is the point where sacrifices start to show. The rocks in the foreground to the left have all but disintegrated, leaving flat marks in their place. The tree on the far right on the other side of the river has thinned out as if subject to a premature winter. Textures generally appear murkier relative to higher settings, and the hill on which Rattay has been built has had its lumps and bumps smoothed over considerably.

With an average frame rate of 53fps, it is a significant frame rate gain, but a tough ask considering the quality downgrade. Our testing on medium recorded a minimum frame rate of 31 and a maximum of 69. 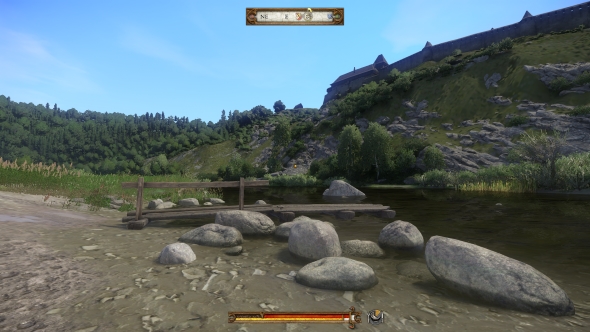 The difference between low and medium is negligible, really. You would have to look closely at two screenshots side-by-side to spot the lower texture and shadow detail. Vegetation has thinned once again, and the technology that brought life to the trees in the distance on ultra high is nowhere to be seen.

However, our tests managed to squeeze an average frame rate of 70fps on low. In terms of min/max frame rate, our tests recorded 55fps and 89, respectively.

If you are seeking a frame rate above 60, the gap between ultra high and low is not huge. Even on lowest settings, it is unlikely that you will not find something in Kingdom Come: Deliverance that will impress. You would have to be wearing a bascinet will the least generous of visors to see otherwise.

To see how Kingdom Come: Deliverance performs on different hardware, we have tested the game on five different graphics cards: three from Nvidia, and two from AMD. We have sampled from both the current and last generation of GPUs in order to offer the most useful information.

All five cards are tested on the game’s ultra high preset, which dials every texture option up as high as they will go. The results of the test – in which we used FRAPS – can be viewed in the graph below.

The results will be a concern to any player looking for 60fps at the highest settings. Even on a GTX 1070 – a card we have used in our tech review here for the first time – managed only a miserly 30fps. Given power of the 1070 this is a real shame.

Oddly, the older generation GPUs we used were not too far away from 30fps on ultra high, either. AMD’s ageing R9 380 managed an average of 27fps with the GTX 970 lagging behind on 23fps. Not far away was the AMD RX 580, which actually put in the strongest average frame rate performance of 31fps. It does not seem so hard to get 30fps on the highest settings, but it appears to be much more challenging to squeeze much more than that from the most common of graphics cards.

This 30fps cap at ultra is a perplexing issue. We theorised that it could be due to CPU bottlenecking; processor load regularly hits 100% while playing at ultra. We exchanged our usual i5 6600K for a i7 6700K and found the symptoms alleviated slightly; CPU load was significantly lower, and a smoother frame rate was achieved. However, despite the more powerful processor, the results were not game changing: an average of 31fps on a GTX 1070, and 24fps on a 970. CPU load does not appear to be the issue then. Our current theory is that at ultra settings the game’s draw distance is overly-long, rendering in unnecessary objects far beyond the player’s view and thus taxing the GPU and frame rate. It is a pretty undesirable situation.

In addition, no matter what card we tested, we experienced issues. With each setup we tried we encountered texture pop-in and bugs such as headless NPCs. Updates and patches are on their way but, it is highly unlikely you will not come up against virtual roadblocks.

How to run Kingdom Come: Deliverance at 60fps

On a GTX 1060 you should prepare for a game of limbo with your card if you want to reach the promised lands of 60fps. To achieve this, you will need to select the low preset, and then increase the shaders, shadows, and textures to medium. This results in an average of 62fps. There is some wriggle room on medium if you are willing to have a dig through the advanced graphics settings. However, there is little difference between low and medium graphics presets, so there is not particularly much to gain.

Our other graphics cards experienced a similar story. The most capable card tested, the Nvidia GTX 1070, coughed up a disappointing 62fps on medium. If we are to shell out for a 1070 we would hope to be able to play the latest games on something higher than medium settings at 60fps. Clearly Kingdom Come: Deliverance is overly hungry.

As we noted in our performance benchmarks, our older GPUs punched above their weight relative to their stronger siblings. The R9 380 registered a respectable average of 59fps on medium. The RX 580 actually bettered the 1070 on medium, scoring a 65fps average. This means that, on each of the five cards we tested, you will get Kingdom Come: Deliverance running at 60fps by dropping to medium or to low with advanced texture and shader options tweaked up to medium.

In Warhorse Studios’s push for a facsimile of Middle Ages Bohemia, the team gave themselves plenty of muddy mountains to climb with Kingdom Come: Deliverance. Before more hefty updates land, chances are you will encounter problems; we often suffered texture pop-in, briefly headless NPCs, and mission objectives failing to trigger.

Those bugs are only emphasised by the game’s incredibly thirsty performance. Kingdom Come: Deliverance may be a game that can look relatively handsome on the lowest settings, but that is all you are likely to experience should you wish a decent frame rate. On all the five cards we tested, medium or low with some tweaking was as high as we could crank the game in order to hit 60fps. While the minimum specs are unusually low, it appears that no matter how capable your rig, performance is frequently weak; our Hardware Editor is running the game on a Titan X GPU at 1440p and finding it hard to break the mid-40s fps barrier. It is never quite unplayable, but stuttering is a common problem, and the compromises that must be made to achieve an acceptable frame rate are deeply disappointing.

These problems are not disastrous enough for us to outright recommend avoiding Kingdom Come: Deliverance, but do be warned: this is not a smooth ride for anyone, especially not those using the most common hardware setups.

Has Kingdom Come: Deliverance stressed your setup? Let us know in the comments below.