When I first started playing Kingdom Come: Deliverance I approached it like any other modern RPG. I gravitated towards swords, shields, and in-your-face combat, and neglected subtler proclivities such as pickpocketing and lockpicking. What I quickly learned, however, is that Deliverance is not like any other modern RPG due to Warhorse Studios’ aspiration to depict  the game’s medieval setting realistically.

One of the first quests you get after finishing up the game’s opening moments involves stealing a ring. At first you are asked to dig up a dead body and take the ring – but when I do so the ring has already been taken. Now I must steal the keepsake from the thief, breaking into his house and gaining access to his locked trunk. Easy, right? I have spent dozens of hours thieving it up in Morrowind, Oblivion, and Skyrim so this should be a breeze. Just sneak in at night time, pick the lock, and be on my merry way. If only it were so simple.

Lockpicking in Deliverance is more intricate than it is in The Elder Scrolls. You have to make an icon hover over a specific spot on the lock diagram and keep it in place as you rotate the entire mechanism. Ambidexterity is a definite advantage here.

My attempt fails miserably and my pick breaks. As I turn to leave and reassess my dilemma, I run straight into my mark – naturally, the old man is a little upset. Not as upset as he is going to be, though: I channel my inner Tamriel knowledge and decide to kill him outright instead. It’s only a videogame, what is the worst that could happen? 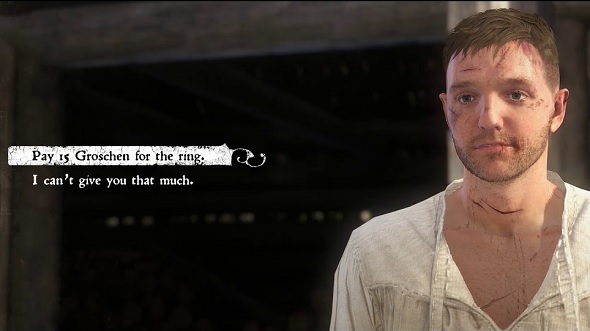 I make quick work of the unarmed, defenseless homeowner and end up covered in his blood – my clothes stained and my blade now wet. After finding the trunk key I need on the dead man, I decide to hide the body to alleviate my conscience a little – in a cupboard, out of mind, as the famous saying goes – but it doesn’t help. Who is going to tend to the farm and animals now?

The next day I walk into the blacksmith’s forging area and strike up conversation, but he tells me to get lost. Confused, I am prompted to either pay him 200 gold to talk to me, or to walk away. I even notice guards asking if they can search me for stolen goods on a frequent basis now as well.

That’s when it hit me: my sword and clothes are still covered in the dead man’s blood. 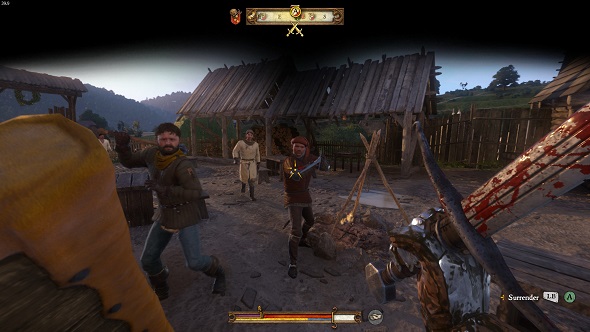 I forgot to wash myself and maintain my sword at the grindstone to get rid of the blood residue. I must look like a medieval Patrick Bateman at this point, casually trying to chat about the weather while wearing the insides of my victim. The sense of guilt I feel is overwhelming.

Well over 20 hours into the game later and the people of Rattay are still giving me a hard time. I have reached dead ends on a few quests because no-one will talk to me – rebuilding those frayed relationships is a slow process. Despite everything games have taught me up until this point, it turns out that committing senseless murder isn’t always the best solution to your problems.