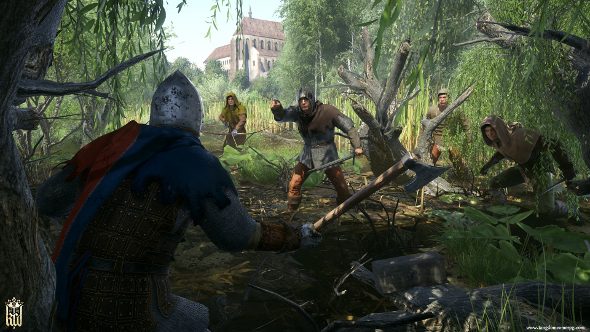 To get folk excited about playing Kingdom Come: Deliverance at Gamescom, Warhorse Studios and Deep Silver have released a story trailer for the historical RPG today. It might lamentably have the opposite of its intended impact, however, as it falls a little flat.

Take a gander at everything we know about Kingdom Come: Deliverance.

Kingdom Come already has a lot going for it, as the narrative is going to be driven by our decisions, but what’s on display in the trailer isn’t exactly whetting my appetite.

It shows that we’ll take on the initially dull life of Henry, the son of a blacksmith, who spends his days mucking around and throwing shit at houses. It’s a peaceful existence until some mercenaries raid the village under the orders of King Sigismund, leaving Henry orphaned. He then joins Sir Radzig to get training in the hopes of avenging his parents.

It’s all a bit by the numbers, isn’t it? And the voice acting leaves a lot to be desired, too. It’s not irredeemably terrible, but it seems to be incredibly inconsistent, even down to the accents which range from English and German to American in a single village.

The release date is way off, however, so hopefully there’s still time for a bit more polish before February 13. We enjoyed most of what we played of the game previously, at least.