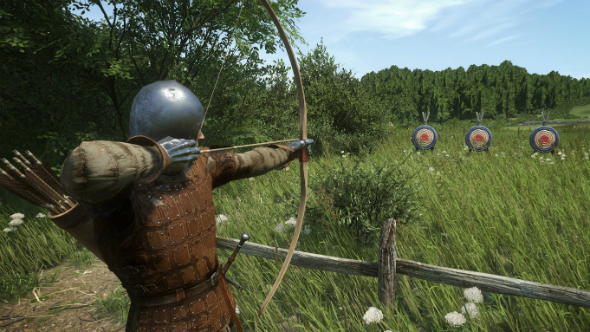 Kingdom Come: Deliverance officially launches across all platforms tomorrow but be prepared for a large day one patch – 20GB to be exact.

Did you know Kingdom Come: Deliverance encourages a life of celibacy with an achievement for staying a virgin.

Open-world RPG Kingdom Come: Deliverance doesn’t technically launch until tomorrow, but some players managed to get their hands on the game several days ago and immediately noticed something alarming – the size of the day one patch.

Gadgets360originallyreported that the PlayStation 4 update for the game is 23GB, with the total game size taking up 46GB. The article, and its accompanying images, were posted to ResetEra, where users lamented their future loss of storage space and speculated over whether the patch was this big across all platforms and for both disc and digital users.

However, publisher Deep Silver’s Will Powers stepped in to clear up confusion and explain why the update is such a whopper.

“The way that I’ve been told that the engine works, is it takes the entire game and separates the PKG or ISO into 2GB archives,” Powers explains on ResetEra. “If during a patch you so much as alter a 1KB text file within any of these 2GB archives, then you need to reupload the ENTIRE 2GB portion.

“That beings said, this is a major patch that improves overarching mechanics throughout the game, so it touches almost all of these 2GB archives in the entire game build. Essentially you are having to redownload the game to replace the existing files. It shouldn’t stack them and inflate on your hard drive, but rather replace the previously downloaded build files.”

Powers also shared a statement from Warhorse’s executive producer, Martin Kilma, who explains the purpose of the patch and why it is so hefty.

“Four years after our Kickstarter campaign, our game is set to be released tomorrow,” Powers wrote on Kilma’s behalf. “The task was really big and our team although still quite small and we always wanted to deliver, to create the game we wanted and we believed you wanted. Before talking about some background, all of us at Warhorse would like to thank our community, the backers and friends who helped us to bring this dream to life by giving us the chance to develop what we believe is a unique RPG experience.

The production realities of game development mean that a ‘release’ version has to be finalized some time before the actual release date. We could have used this time to get some rest, or we could use it to create some additional content and sell it to you as DLC, but we went back to the version-to-be-released and worked on it. The results are obvious: quests are more balanced, RPG progression is smoother, the game runs faster and every facet of the game got more polish. The drawback of course is that most of the data in the old build was replaced and has to be downloaded as a patch. At a hefty size, it’s going to take some time to download and it’s a shame. Still, we strongly believe that after four years wait it will pay off to wait a little bit longer while the day one patch is downloading. Trust me, it will deliver the awesome experience you deserve.”

Powers went on to explain the download size is the same for both the digital and disc copy of the game. “With disc versions, it can’t replace the files from the disc. It does replace with digital downloads though,” Powers clarifies.

The Steam version of Kingdom Come: Deliverance weighs in at 20GB, just slightly less than its console cousin, but still takes up 35GB.