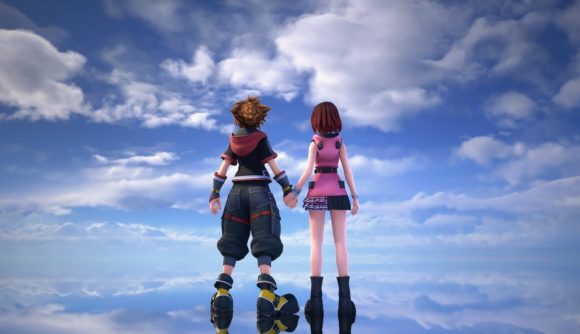 All four titles hit the Epic Games Store on March 30, 2021. Between all these titles, you’re getting pretty much the complete Kingdom Hearts experience. HD 1.5 + 2.5 remix includes remastered versions of KH1, KH2, Re:Chain of Memories, and Birth by Sleep, as well as cinematic versions of 358/2 Days and Re:Coded. The 2.8 collection includes a remastered Dream Drop Distance, the Aqua-focused interquel, 0.2, and a cinematic version of Back Cover.

The naming gets simpler from here, I promise. Kingdom Hearts 3 also launches in this collection, as does Melody of Memory, the rhythm game spin-off which hit consoles just last year.

As someone who just played through every Kingdom Hearts game for the first time a couple of years ago, take it from me – you’re going to want to pace yourself. You can pre-order everything from Epic here.

The iconic @KINGDOMHEARTS Series is coming to PC for the first time ever on March 30th!

Are you ready to join Sora and friends in their battle against the darkness? Pre-order all the titles in the @KINGDOMHEARTS series starting today 👑https://t.co/nUKDdLoEcZ pic.twitter.com/RgcfVk3CFA

If you’re looking for more anime games – there’s only so much anime you can take at one time, I know – you can follow that link.