Returning to a place that’s the source of many fond memories, seeped in nostalgia, is an awkward experience. What if it’s completely different? What if your old chums are just awful. What if all the places you loved to visit are all gone? And worse, what if it’s you that’s changed too much?

These were the thoughts running through my noggin as I settled in and fired up King’s Quest Chapter 1: A Knight to Remember, the first King’s Quest game in 21 years. Mask of Eternity? Never heard of it.

Playing The Odd Gentleman’s resurrection of the beloved Sierra series was never going to be like those decades old adventures in Daventry, with Graham and his kids. It’s impossible to recapture something that was so of its time, when adventure games still drove PC gaming. 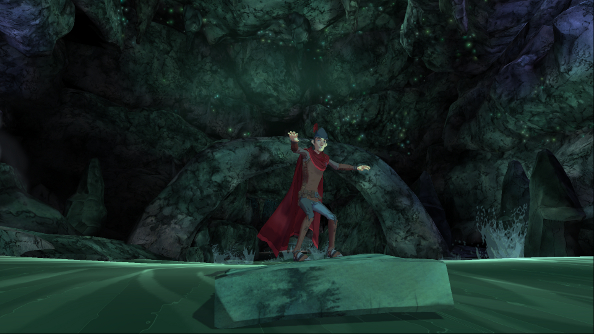 Yet it’s still familiar. A Knight to Remember is a story spun by King Graham to entertain his granddaughter. The tale is his first adventure–though there’s a prologue that takes placeduring the original King’s Quest–where he becomes a knight and starts on the path to becoming king of Daventry. It’s an adventure filled with great deeds and great rewards,and fits comfortably into the history of King’s Quest.

Less comfortably, it straddles the line between point-and-click adventure games and the narrative adventures popularised by Telltale’s The Walking Dead. Point-and-click controls, combining objects to solve puzzles, screens filled with interactive elements – they’ve all been chucked out in favour of WSAD controls and lots of QTE sequences and action set pieces. Puzzles and quests, at least, have been saved, and are abundant.

When it works, this first chapter has some of the most exciting moments in a King’s Quest game. At two points during the first half of the game, Graham can enter the lair of a dragon – events that are separated by many years – and they’re more evocative of Uncharted than a typical adventure game. 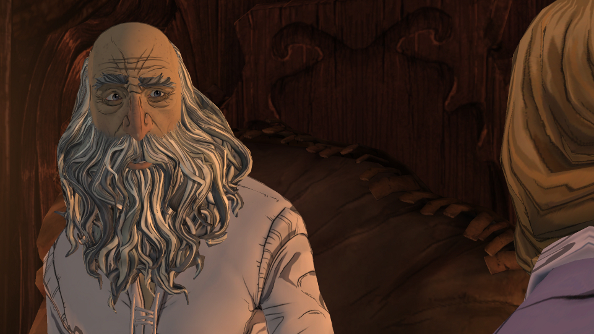 Graham leaps and runs through countless death traps, avoiding the searing breath of a dragon while hanging onto dangling rocks for dear life as everything collapses around him. It’s a rousing adventure for a brave prospective knight. It’s all a lot more flashy and action-packed than previous King’s Quest games, but doesn’t feel out of place given that Graham is anadventurertaking on adragon.Of course there’s going to be fire and leaping and near death experiences.

When the pace slows, however, a couple of cracks start to appear.

The first half of the game, despite being very removed from what you’d expect from the series, is the highpoint. It’s strange, because it’s also the half of the game that has the least amount of and least challenging puzzles. Every solution is signposted, and in most cases, the solution is literally the only thing you can actually do in the scene. But it seems like, at least in this part of A Knight to Remember, The Odd Gentleman understand that what really makes a good puzzle is not how tricky it is, but how engaging and rewarding it is. They might be easy to solve, but there’s always a great pay off. 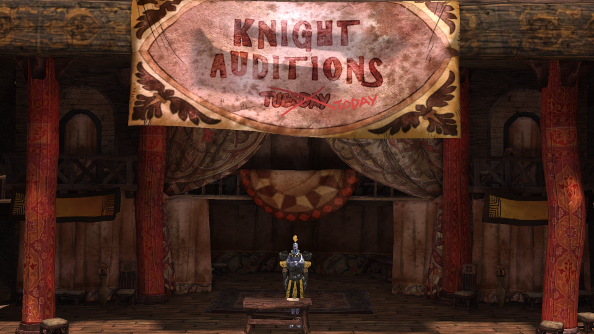 It’s the rest of the game, when you’re wandering around Daventry, where things become a wee bit uneven. The whole reason that Graham’s come to Daventry is because he wants to become a knight by winning a tournament. He needs to get the eye of a beast to prove he’s made of the right stuff, and then beat his fellow competitors in games of strength, speed and wits. But of course there’s a mountain of obstacles to overcome first.

Far too often, the solution is simply to bring someone an item, and there’s such a dearth of interactive objects and inventory items that finding a way to get that item takes about as much brain power as remembering to put down the toilet seat when you’ve finished peeing.

What makes these different from the easy puzzles in the dragon’s lair is the way they are padded out and often lacking immediate pay offs. Daventry isn’t huge, but there are enough screens, which you’ll end up backtracking through frequently, so that wandering around becomes a bit of a slog. 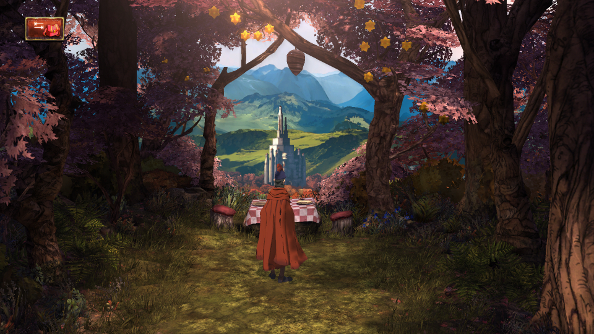 There are worse places, I suppose, to do a spot of sightseeing. It’s a beautiful place, is Daventry, elevated by a style that borrows from both Disney and comics, and is accompanied by a stirring soundtrack. But when you’ve walked by a pretty spot where you can’t do anything five times already, it starts to lose its shine.

I recall going to a lot of effort to get down one path where I had to make my way through a dark cave filled with wolves. To get through the cave involved multiple puzzles and tasks, and after all of that effort – I was trying to get my noble steed, Triumph, who was on the other side – I discovered that there was yet another puzzle to surmount before I could rescue my pal, and at that point of the game it was impossible to solve. It was horribly deflating.

But! There are actually a few extremely creative puzzles that, I confess, did make the boring treks through mostly empty areas and all that backtracking a bit easier to swallow. Again, these puzzles aren’t exactly imposing, but they are extremely fun. 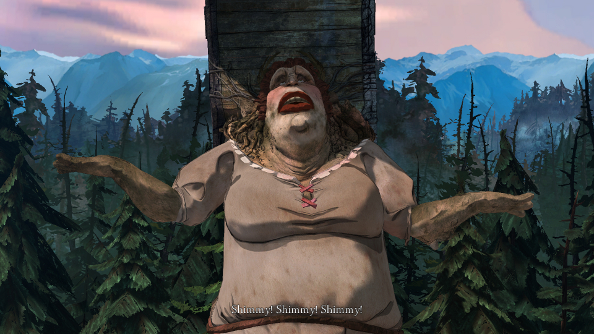 Infiltrating a Bridge Troll union that had gone on strike, winning a duel with a ball of yarn, riding a guard who, himself, was riding a guard in a horse race – all brilliant moments and welcome reprieves from collecting ingredients for people. Several puzzles are also blessed with multiple solutions and choices that will go on to define Graham, the consequences of which we only start to see in A Knight to Remember.

At around five or six hours long, A Knight to Remember is both long for an episodic game and long for a King’s Quest game, though the old ones did have a fondness for killing their protagonists and throwing some pretty unfair puzzles that increased the length substantially. When the series finishes, it’s going to be huge.

So it’s a beefy game, fattened up with a lot of aimless wandering, but I stuck around not just for the aforementioned creative puzzles, but because I’ve become reinvested in King’s Quest. King’s Quest has always had this thread of legacy and family running through it, and it’s very much alive in A Knight to Remember. Graham’s story is, in many ways, a lesson for his granddaughter, a tale to mold her into a good ruler. At easy to spot points throughout the game, Graham the younger has to choose different paths: should he be bold, quick-witted or kind. While it’s not got the harrowing, emotional resonance of something like The Walking Dead, it’s still a bit affecting. 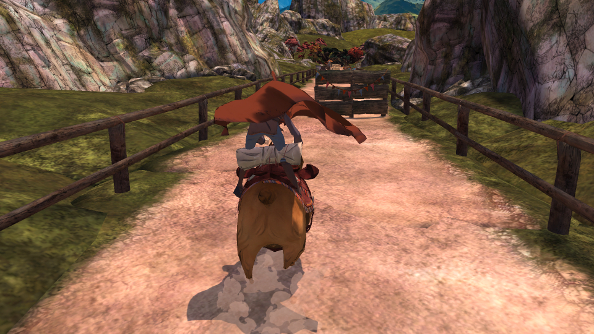 When I attempted to trick someone during one of the trials, and succeeded, Graham’s granddaughter pipes up, asking if he really tricked the fella instead of beating him fair and square. Well, after that, I couldn’t do it. I said “Of course not,” and the scene was replayed, allowing me to choose the more noble option. Kids, they’re manipulative bastards

Christopher Lloyd, who lends his voice to the elderly King Graham, narrates the adventure with a natural storyteller’s skill, and his charisma makes even his most criminal of puns utterly endearing, while Josh Keaton does an equally excellent job capturing the earnest naievety of the younger Graham. Together they make the wannabe knight easy to root for and his rather wacky journey heartfelt and personal.

The fetch quests and backtracking grate, but A Knight to Remember is still a fairly strong start to King’s Quest. Even though it’s a self-contained story that leaves few loose threads, I’m keen to return and see Graham grow into the famous Knight he’s meant to be. So much has changed in 21 years, but it’s good to be back in Daventry.