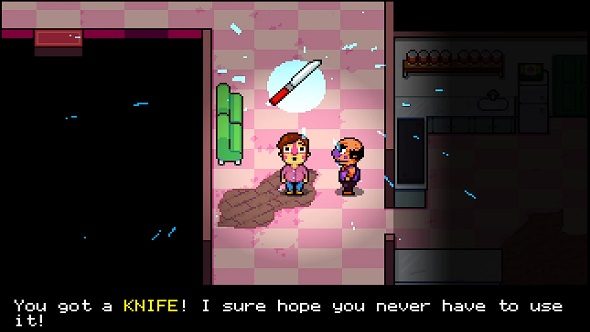 Featuring such gripping tasks as taking out the rubbish, beating up bees wearing sunglasses and grappling with existential dread, Knuckle Sandwich is one surreal RPG. Casting players as a young man who has just moved to the big city, Knuckle Sandwich has you trying to solve a missing persons case, while working a soul crushing job in a run-down diner.

For more fantastical quests and adventures, take a look at these great PC RPGs.

Your time in Knuckle Sandwich is split between investigating these sudden disappearances and serving burgers at your 9 to 5. As you search the town, you’ll deal with fanatical cults, local gangs and the crushing boredom of working a job you absolutely hate. While its aesthetic is certainly bright and zany, Knuckle Sandwich promises quite a macabre story as you uncover what exactly is going on in this town. One of the key features of Knuckle Sandwich is “running away from your problems”, so expect some angsty introspection in between punching trash ghosts in the face.

Speaking of fighting, Knuckle Sandwich’s battle system is a melange of turn based RPGs like Earthbound and the Mario and Luigi series, alongside the wacky minigames of WarioWare. Certain special moves will have you completing tasks like exploring a multi-coloured maze or trying to hit enemies within a pinball machine. The enemies you fight are equally as odd, with giant walking noses and frozen piles of goop acting as your standard opponents.

There is even a Pokemon-esque catching sequence, as seen in the trailer where the player catches a humanoid version of Garfield with a pink moustache and a hat that reads ‘HELP’. The weirdness runs deep in this one.

If the mad monster designs don’t gel with you, the “ridiculously hip” soundtrack should with its emphasis on funky electronic beats. Much like the battle system, the tracks pay homage to the music found in the WarioWare and Mother series, so fans of those games should be right at home here.

I’ve certainly had my eye on Knuckle Sandwich for quite a while and I imagine this glimpse into its bonkers world may have turned a few heads. A demo is planned to be available in the near future, so keep checking back on the Knuckle Sandwich website for more information.