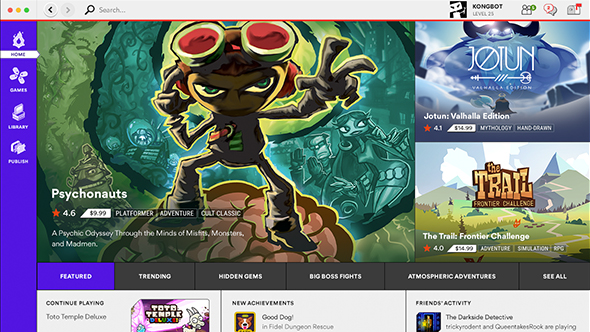 You probably know Kongregate as a website specialized in bringing games to your browser, but now they’re looking to expand their offerings. Later this year they’ll launch Kartridge, a PC gaming platform set to compete with the likes of Steam.

The official announcement emphasizes support for developers as one of Kartridge’s core tenets. Developers will have no approval process to undergo and no upload fees, in contrast to the $100 Steam direct fee. A wide variety of monetization options will also be available, including standard purchases, free-to-play options, ad-supported models, and pay-what-you-want configurations.

With a minimal barrier to entry, Kartridge will help to direct players toward games both through algorithms and curation from an editorial team. Kongregate CEO Emily Greer tells GamesIndustry.biz that “this approach will help surface titles that are getting lost in other marketplaces and will help players find new content they didn’t know they’d love.”

Greer says “We acknowledge Steam’s leadership in the industry, but we feel there is a gap in the market offering that we are uniquely qualified to remedy.”

Kartridge will also have a big emphasis on community features, with chat features intended to cross between the store and the games themselves. The platform will also feature extensive achievement levelling systems entirely separate from those on Kongregate.

But Kongregate itself isn’t going anywhere, the the developers acknowledge that the decline in browser support for Flash and Unity has led many game makers to move toward downloadable games on PC. The company has already published several games on Steam themselves.

Expect Kartridge to launch summer 2018. A closed beta is set to begin in the next few weeks, and you can enter your email address at Kongregate to stay up to date.