Landmark just hit closed beta, dropping several things – the words ‘Everquest’ and ‘Next’ from its name, and $40 from the cost of entry. The first bit seems a bit odd, but there’s no complaining about the latter.

The final version will be free to play, and the only real benefit of jumping in now is, well, being able to jump in now. $20/£14 is a much more reasonable fee though, especially as Landmark has come on a long way since our first visit. It’s still far from finished, but it’s increasingly coming together into what Sony wants it to be. 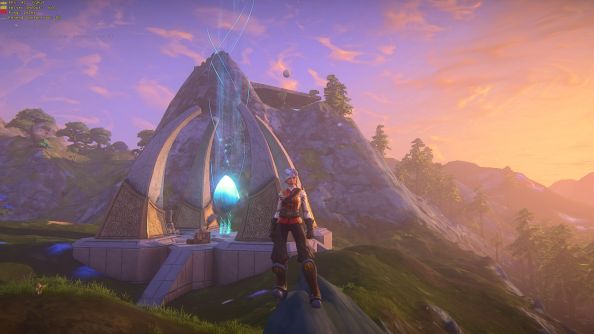 Not too surprisingly, a couple of months haven’t diminished the impressiveness of its building engine. Landmark makes everything else look like Lego – no, more like Duplo. There’s still no Redstone, flowing water, or other elements to make creations interactive, but the ability to carve out mountains and spray dirt, stone and metals from your fingertips in blocks and spheres and lines allows for incredible flexibility and many amazing builds.

Users have also found hacks that Sony so far at least seems to approve of, notably ‘micro-voxels’ – tiny, tiny little blocks created by smoothing the edges of a regular one that can be used for detail work. Most people inevitably use all this to build houses and castles and crafting benches, but just as often you’ll come across a McDonalds or a giant statue or a Viking ship.

Or at least, you will once the new beta has bedded in properly and people have had a chance to rebuild. Here’s some of the best Everquest Next: Landmark creations we’ve found so far.

This beta stage feels more like a ‘game’ than a toy, starting with the fact that you no longer begin with the ability to make a claim and start building. That’s not a huge problem though, they’re cheap – unlike the flags that let you extend a claim for bigger builds, which require a sack of different materials. Mine some iron, chop down some trees, and with a bit of luck you’ll be ready to build in just a few minutes. Unlike the last beta, there’s plenty of room to claim across the different servers now, making it easy to find a spot to get started with. 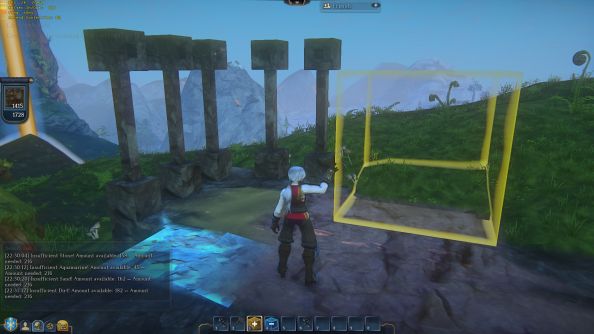 Also, they’re far more interesting places now. Previously each was a single biome – desert or forest, and pretty dull for it. Now snow and ice have added to that and each map can mix together a couple of styles, allowing for green forests amongst snowy peaks. For extra flavour, you can also pretend that the big blocks that mark claim boundaries are the game cubes from the cartoon Reboot, that Bob is inside fighting the User, and then realise you are Old.

Most features have yet to be added though, and many that are in are firmly work-in-progress. There’s no wildlife, no combat, no death and no real goal, and despite the addition of teleport crystals to get to your claim/the world’s hub, there’s a lot of walking around to gather resources from different worlds and their different tiers. In future, resources will be buried in the ground of each island, with caves to be added and ley-lines for getting around a map without everything being a hike. Other features on the roadmap include running water, treasure chests, and the need to unlock recipes before making tools and basics. That one makes me murmur though, as do a few of the features intended to add challenge.

The appeal of Landmark is in being able to create, and Minecraft has demonstrated pretty well that the joy of doing so is its own reward – give or take resource hunting. While Sony wants this to be an MMO, it would be unfortunate to see it go too far down the road of holding future Da Vincis from their best tools unless they first prove they have a big wallet or can beat the shit out of many wolves. 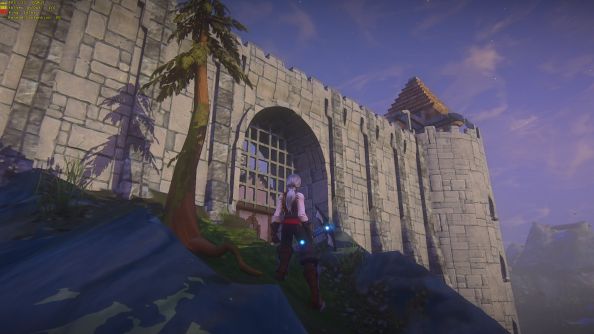 With such a long WIP list then, you’ll be glad that the one thing Sony’s wasted no time on is implementing its real-money shop – using Station Cash, of course. Snark aside though, it’s not too bad. Pricey, yes but not offensive. It only sells resources and outfits so far; including a box of iron ore for five bucks, but not yet a “Christ, I just bought a box of iron ore for five bucks” T-Shirt to commemorate it. All resources can be dug up the old fashioned way though, and long-term there’s going to be in-game currency and player stalls to allow for a proper economy rather than just survival of the richest and least busy. Creators of cool stuff will also be able to see money flow the other way, selling templates for real money and walking off with a cheque. Once all this other stuff is in place, assuming plentiful resources to harvest and not too much needless crap-work, Sony should have a respectable F2P model on its hands.

Something that already hints towards it is Landmark’s careful approach to both resource management and appreciation of the effort that goes into making cool things. For starters, if you create a claim, build it up, then delete it, all the resources go back into your backpack. Players from the first beta also got to keep the templates from their creations to reestablish in this closed beta, and hopefully that will keep carrying on to release. The upkeep system also demonstrates this. Claims are now just rentals, with a daily (auto-deducted, with the option to pay for up to five days in advance) fee to keep your space – currently in copper ore until in-game currency is added. If you fail to pay though, all you lose is your spot. Both your resources and templates are returned, allowing you to quickly resume elsewhere. 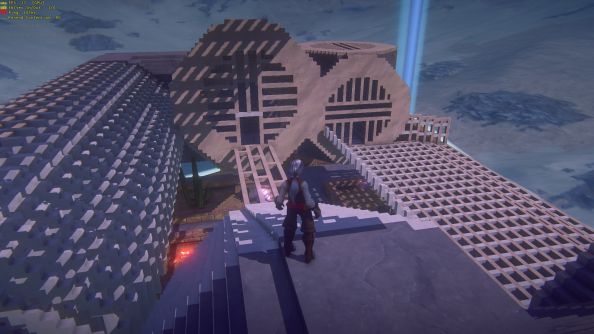 It remains to be seen how much of a pain upkeep will be, but hopefully SOE won’t make it too onerous. There’s also scope for other methods of upkeep. It’s now possible to give a thumbs up to good builds, with more options later on. Perhaps a build that gets enough of those could be given protected status while people wandering past are appreciative, even if the creator has decided to go and take a sabbatical over in Draenor or wherever. This being a free to play game with controlled servers and limited space to play with though, some form of culling is required to prevent the worlds becoming more Landfill than Landmark.

To jump in or not to jump in? You’re still not getting an actual game, but progress is clicking on at a decent pace and if it’s the building side that you’re most interested in, that’s ready for you to show off what you can do. Both Landmark and Everquest Next continue to be hands down two of the most interesting MMOs on the horizon, and this is a great demo of exactly why. Do be aware though that in pushing it to be more of a game with building in it than something like Minecraft’s Creative Mode, Sony’s attentions are firmly on making that side of things harder and more complex over time. Done well, it’ll hopefully add a great sense of community and economy to the world. It might however turn out not to be the simple, basic foundation you might be dreaming of for the builds in your head.