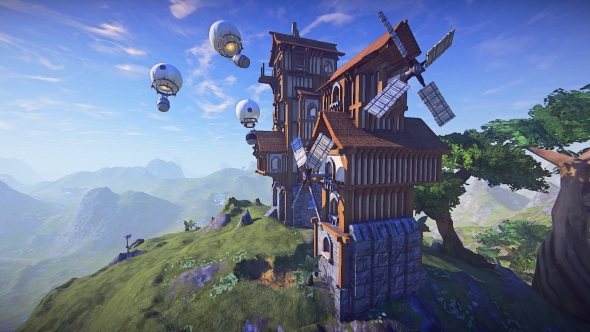 Voxel-building MMO Landmark, which sprang from the ashes of canceled EverQuest Next, will close its servers for good at 4pm Pacific time on February 21. Though it had a long beta (from March 2014), Landmark officially launched on June 10 last year, meaning it’s been live for only seven months so far.

Landmark players, scratch your itch with the best MMOs on PC. They won’t have voxel-based construction though :`-(

The news comes via an announcement on the Landmark news blog yesterday. Developers Daybreak say they made the decision “with heavy hearts” and “after much review”.

Current players can still enjoy the game until the plug is pulled, but as of the announcement, Landmark is no longer available to purchase (it’s been taken off Steam), and nor are player studio items in the Landmark marketplace. All items in the marketplace with a Daybreak Cash price will be reduced to 1 DBC. Daybreak assure current players with Daybreak Cash that it will still be valid in other Daybreak games.

Daybreak say they will “retain all of the code and data from Landmark”, and “will not license or authorise the operation of a Landmark emulator or a fan-operated Landmark server.” All official websites and forums associated with the game will also be shut down alongside it.

Landmark was originally conceived as a building tool for EverQuest Next, Daybreak’s intended successor to legendary MMORPG EverQuest. Players would use Landmark to build things, and the best creations would find their way into EverQuest Next.

When that game was canceled, Landmark was reworked, with Daybreak commenting “as the community has grown and designs have flourished, we no longer view Landmark as just a building tool. We’ve been toiling away making Landmark into a wonder unto itself… Landmark has evolved into its own game with its own unique identity and purpose.”

I always thought EverQuest Next and its voxel-based construction/destruction systems looked interesting, so it’s sad to see that there will soon be very little trace of them left in the world. It’s tough out there for MMOs.