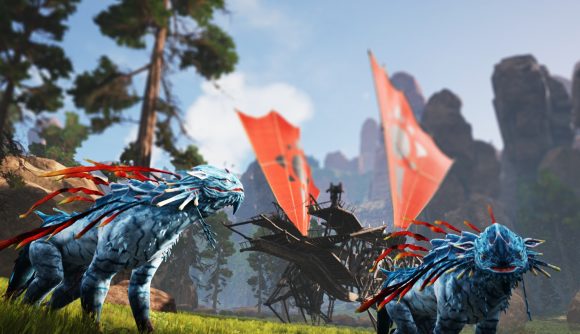 There are fewer things more frustrating in games than lost progress. It’s something EVE Online players know well as you can spend time mining, setting up trade routes, and shifting cargo across space only to have another player gank your supplies and payday. While Last Oasis developer Donkey Crew wants to include that balance of risk and reward in its upcoming survival game, it also wants to be “more fast-paced” than EVE Online by having a less complex trading system.

“For me, EVE Online is a large influence,” Hofreither explains. “You can see that a lot in the economy of the game and how we have set up the trade stations and how we have prepared mechanics for pirating and things like that.

“But, also, what we recognise is we don’t want a spreadsheets in space situation. So we do want it to be more fast-paced, but still, there’s this feeling of loss when you lose things, and so that means that there’s risk involved as well. We do think, though, that we’re appealing to both sides of the audience, not just newcomers or hardcore fans.”

In Last Oasis, you’re marooned on a post-apocalyptic land with little to your name. As you build yourself back up, you take to killing prey, finding materials, and then trading them for a reward to help you survive and grow.

Eventually you can own an oasis, get a bonus if another player harvests something there, and then set up trade routes to different oases. Much like EVE Online, that gameplay loop can become disrupted by pirates looking for an easy score.

Last Oasis has other inspirations, too. Donkey Crew originally came together creating Mount & Blade: Warband’s CRPG mod, and it shows in Last Oasis’s gameplay. If this all sounds like your kind of thing, you can join the game’s early access when Last Oasis launches on Steam March 26.