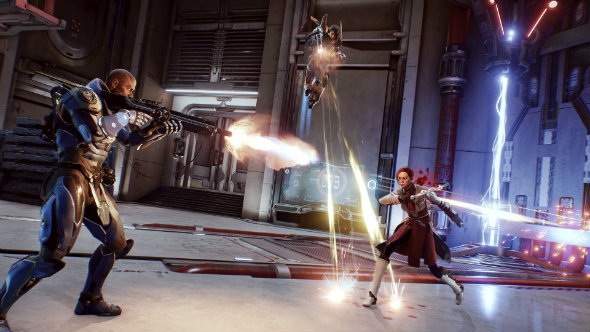 Boss Key have announced that the closed beta for the gravity-defying shooter LawBreakers will run from March 16 to 19. This closed beta is set to show off new game modes, maps and roles, based off the extensive feedback from last year’s alpha.

Have a read of our interview with Cliff Bleszinski about the development of LawBreakers.

Three brand new roles for both the Laws and the Breakers will be playable during this closed beta, as well as a new map titled Mammoth. If you are at PAX East, you will be able to get a early preview of the beta, with a dedicated LawBreakers station open throughout the whole show. There will be hourly shoutcasts of LawBreakers games, with the best players from each day getting to compete in a special show match to win some exclusive swag. You should probably tune into these matches to nick the best strategies ahead of the closed beta.

Boss Key are set to hold a special panel at PAX East titled ‘Action After Alpha’, charting the studio’s progress from last year’s alpha to the upcoming closed beta. For those interested in the process of game development and how community feedback is implemented into a final product, try to attend the presentation.

Don’t worry if you are not attending PAX East as the closed beta will be launching the week after, for three days of intense testing. The beta will kick off on March 16 at 4pm UTC and will run until 4am UTC on March 19. If you were part of the LawBreakers alpha, you will automatically receive a beta key while those looking to try out the shooter for the first time will have to sign up for beta access.

You should get sent a confirmation email a few days before the beta goes live, which should contain a link to download the game. Download it and you’ll be ready to play just as the servers go live.