“In LawBreakers you’re going to beat gravity into submission,” begins Boss Key’s Rohan Rivas ahead of my first brush with the new class-based shooter.

His elevator sales pitch doesn’t quite give the full picture of a 5v5 multiplayer against humans with unique abilities, rather than a fundamental force of nature, but it does enough to stop the lift.

“Why not have a vision instead of just making the same shit as everyone else?” says CliffyB about LawBreakers.

Rivas’ sentiment comes from the central theme of LawBreakers revolving around a sci-fi universe in which gravity has gone all sorts of awry. Owing to some ‘clandestine government experiments’ conducted on the moon, the earth has undergone a cataclysmic event called The Shattering.

The result of this extremely sci-fi plot point is that in 2098, humans now have the ability to manipulate gravity in different ways while areas of natural beauty on our planet have been ravaged by ‘gravitational anomalies’.

Humans have reacted strangely to these developments. First of all, and fairly rationally, they’ve divided themselves into two camps: the Law, and the Breakers (clever). Next, also rationally, they’ve equipped themselves with a bunch of wicked-bad guns and some gnarly gravtech to deal with the opposing faction. And finally, they’ve built a train station through the now-ruined faces of Mount Rushmore and sold the Grand Canyon to a shell company owned by the Japanese Yakuza to pay for the clean up bills.

Just as a certain brand of sci-fi relies on a plot only as far as providing a reason for fantastical technology to exist, LawBreakers will say anything just to provide a cool gun in your hands and a nice vista to blow up.

It pays off, as the weapons are extremely satisfying to fire. Each class, of which there were four to play – Titan, Enforcer, Assassin and Vanguard, however a fifth “Recon” class toting a revolver is currently in production – has their own unique guns: a main and a sidearm. The mains and sidearms fit loosely into four distinct categories: assault rifle and pistol, swords and shotgun, rocket launcher and overgrown taser, and snowmobile-engine-powered minigun and Iron-Man-gauntlet-pulse. 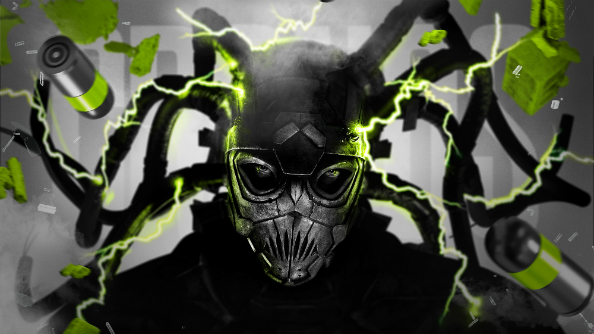 Of course, each of those pairings suggests a specific playstyle, and the abilities and extra tools of each character complement them. But the weapons themselves also have hidden perks that subtly change the way you use each.

For instance, the Enforcer class’s Aerator assault rifle has a spherical magazine which, for sci-fi reasons, increases the heat of bullets towards the end of the magazine, thereby upping their damage. This encourages you to continue firing at an enemy to finish them off, in a similar way that the Vanguard’s minigun gains accuracy and firing speed the longer you hold down the trigger.

The abilities that accompany these bullet-pounding machines of joy range between earth-shattering and weak situational modifiers. The Enforcer, equipped with an assault rifle, is a typical Call of Duty player’s toolkit with some added firepower via shoulder-mounted rockets. As a result, Axel (the Law side’s Enforcer) and Kintaro (on the Breakers) can put out decent damage over medium range, and their movement ability increases their running, firing and reloading speeds as well as those of their allies in an area around them. However their second ability, on the E key, is a simple EMP grenade which prevents opponents using an ability, effectively silencing them.

Compared to all the running and gunning afforded by the rest of their kit, the Enforcers have something of a damp squib in the grenade department. Other classes have some other frustrating drawbacks, like the Titan’s relative lack of mobility and the Assassin’s complete lack of health, but of course they have their strengths too.

Though the classes have different names and character models on each side, they are identical, and according to lead designer and CEO of Boss Key Cliff Bleszinski, the team had originally intended for sides to be asymmetrical in their abilities. However the studio would have required four times as many workers if they had to approach anything like that complexity, and in truth the experience is complex enough.

Each weapon has two fire modes, each character two weapons, two abilities (one movement-based and another thrown like a grenade) and an ultimate which gains charge over time. On top of this, you battle with constantly changing gravity situations caused by either the anomalies themselves – there is one at the centre of every map – or player abilities. The Vanguard’s ultimate, Starfall, in particular plays havoc on skirmishes as they smash into the earth creating a pocket of anti-gravity around the impact site. 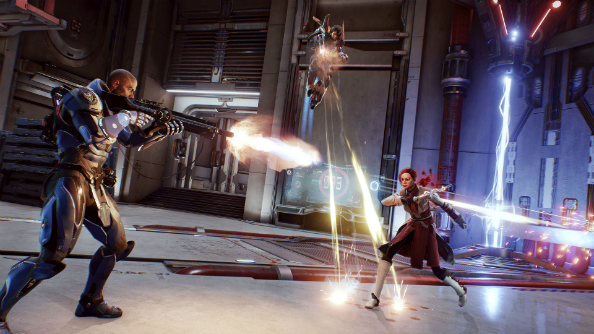 There are no rock, paper, scissor scenarios for the classes – anyone can be taken down by anyone else if they use their skills synergistically. There isn’t a great deal of built-in synergy between characters, and most abilities are focused on aiding the individual using them, but the game mode on offer did a lot to encourage teamplay.

Dubbed Overcharge, both teams are tasked with charging up a battery plonked in the middle of the map’s gravitational anomaly – a large zero-G field. After floating through, you need to hang around next to the battery to lower its charge and be able to pick it up, somewhat like capturing a point in Domination game modes. After you have the battery, you transport it to your base and plug it into the mains to get juicing.

From this point you either defend the battery in your base, or attempt to steal it from the opponent’s. For the first few minutes of the match, it’s likely no-one will do much else other than try and get kills, but once it gets to the final moments and the battery nears 100%, things get serious. Desperate attempts to organise your team to stop going in one by one, to choose a door to rush through, calling out targets to take care of in order to get on the battery, or prevent its capture. 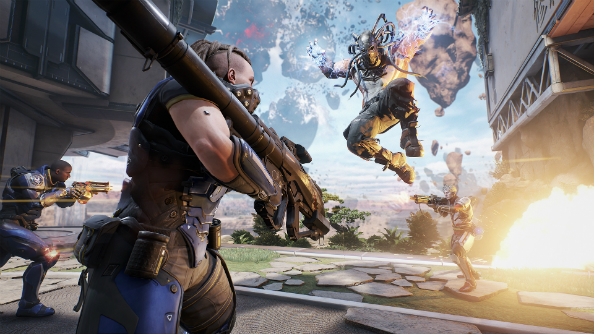 It doesn’t matter who got the battery most of the way charged, it matters who is holding it once it’s at 100%, with a 15-second timer once it hits the critical number. Pulling off a steal in this magic window is the exact kind of thrill Boss Key is looking to provide with this game mode and, though neither team really came close after some fairly convincing stomps, with good matchmaking I can see that being a frantic affair. Somewhere between keeping the ball alive while 1-0 down in Rocket League’s overtime and going for a base race in your MOBA of preference.

Despite BossKey’s early assessment of the game as a free-to-play candidate, they have now opted for the buy once model, with any subsequent maps or characters provided to everyone with the base copy. That base copy’s price isn’t confirmed, but we were assured that it would be a lower than $60 price point supplemented by the sale of cosmetics as they were all “big fans of the CS:GO model”.

As a shooter, LawBreakers is far more Call of Duty, or even Titanfall, than CS:GO. The pace is fast to an almost baffling degree, though learning your character’s strengths and opponent’s weaknesses was gratifying even over the short time I had with the game. 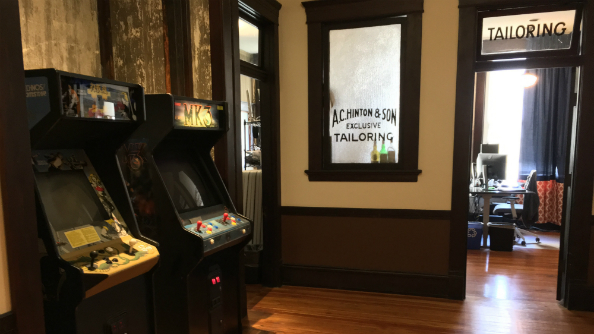 With five confirmed classes, and a pledge for many more to follow, there’s likely one to fit most playstyles and the team’s refusal to give in to cookie-cutter game modes from other team shooters suggests a hopeful future for anyone finding current multiplayer stale.

The key draw of the game, the mechanic designed to pull you in, is clearly the unpredictability of gravity manipulations – and your eventual mastery of them. While it’s undeniable that blasting yourself across an arena with a rocket launcher feels punchy, it was still difficult to control by the end of my time in the world. But that’s the sort of challenge that offers opportunity for recognisable feats of skill – a collective ‘oh shit’ moment for friends and foes alike. As a result, expect the skill ceiling to extend higher than the freshly shattered moon.

LawBreakers is still an exciting game to watch on the event horizon, even if for a lot of my time with it, it was gravity showing me who’s boss.

LawBreakers is due for release in Summer 2016.