There are many things that make LawBreakers, the new arena shooter from Boss Key Productions and Cliff Bleszinski, a lot like Overwatch. Among other similarities, it features a roster of unique characters that use specialist abilities in order to adopt a specific style of play. Bleszinski himself welcomes these comparisons, saying that “If Overwatch is Coke, then LawBreakers can be Pepsi.” And, like the soda to which CliffyB draws parallels, LawBreakers doesn’t feel like a rip-off at all. Instead, it’s a different take on the things that make its rival great, creating an equally viable alternative. In fact, LawBreakers feels like the first genuine post-Overwatch shooter; an FPS crafted to fit perfectly into the new gaming paradigm of 2017.

It’s important to collect some notes before we continue. Like Battleborn and Paladins: Champions of the Realm before it, LawBreakers was in development long before Overwatch was revealed to the world. Back in early 2014, Bleszinski was discussing Project Bluestreak, the arena shooter that would go on to become LawBreakers. Overwatch was revealed in November 2014, and so there’s no room to suggest that LawBreakers was created in response to Overwatch’s success. Yet, unlike Battleborn and Paladins, LawBreakers comes to us more than a whole year after Overwatch’s launch. That’s given Boss Key more than 12 months to analyse Blizzard’s biggest successes, their most notable problems, and apply that to the development of LawBreakers.

The first thing you notice about LawBreakers is how it uses a language very similar to that of Overwatch. Its key bindings are identical; Shift and E trigger your core abilities, while Q pops your Ultimate. And, by extension, that means characters are built in a largely similar fashion, with two cooldown-based skills, and a special ability that needs to be built up before it can be used. Anyone who’s played Overwatch should be able to get to grips with LawBreakers’ basic sensibilities with relative ease. 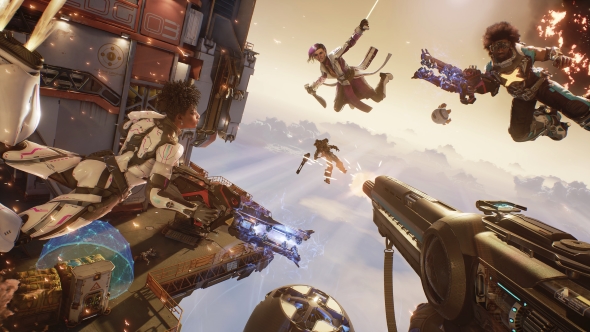 This signals how important Overwatch is to the overall FPS sphere. Recently, I was playing an old FPS that used spacebar to run and had iron sights bound to middle-mouse, and it seemed alien to me that a game would even consider doing this. But it’s an FPS from before 2007, which is when Call of Duty’s dominance redefined the shooter ‘language’ for a generation of FPS games. With its countless millions of players, it’s no surprise that Overwatch has tweaked that language itself and become the new baseline. It makes perfect sense for LawBreakers to adopt both that vocabulary and the ability setup behind it – a huge audience are fluent and ready for more.

This further extends to LawBreakers’ package design. Originally free-to-play, it’s now a paid-for game backed up by a loot box system. Those ‘Stash Boxes’ are filled with four different cosmetic items, such as skins or sprays, graded on a rarity system using similar colours to Blizzard’s behemoth. The way this system works, and the loot expected to be found in each box, will be instantly recognisable to anyone in this post-Overwatch world.

All these elements work as a kind of gateway; comfortable indicators for the modern FPS player. But they’re systems that lead into a game that’s incredibly different to Overwatch in many more ways. While there are plenty of gameplay elements that sync up – colourful characters, small team sizes, distinct roles – many of LawBreakers’ components straight up rebel against current genre trends.

Overwatch draws many of its features from MOBAs. Multiple skills, ultimate abilities, and status effects like slows and knockbacks are all key in games like League of Legends and Dota 2. LawBreakers keeps the fun MOBA elements – characters and skills – but stays far away from components that have no business in a pacey, hyper-active shooter. Its ultimates aren’t game-changing abilities that are overly difficult to escape from, and there are no slows and stops that steal player control and leave them helpless. In LawBreakers you always have agency. It’s an incredibly fast, agile game. 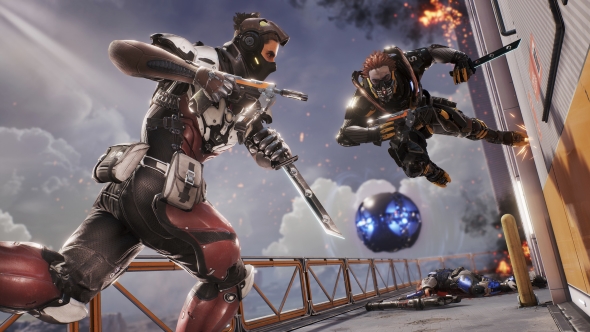 That speed and agility allows you to be far more independent on the battlefield. Overwatch relies heavily on team synergy, and there are ‘must pick’ roles that need to be used in combination with others in order to attain victory. LawBreakers demands team work too, but unlike Overwatch, it doesn’t ask its players to use specific characters for the sake of team composition. You’re free to play the character you enjoy, rather than choosing someone for the simple fact that they’re the required counter for an enemy team pick.

The more you play LawBreakers, the more you realise it bears less resemblance to Overwatch than it would first seem. Instead, it’s much more closely related to Unreal Tournament, the game Cliff Bleszinski really cut his teeth on as a developer. The garish sci-fi art style, neon colours, swift movement, and hitscan weapons all point in that direction. Create a straight-up old-school shooter, though, and you’re asking for trouble. Only a few thousand bought Strafe, and Quake Champions, despite its pedigree, doesn’t feel as if it’s generating the kind of excitement online that I’d expect. But by assessing modern trends and adopting the best of them, Bleszinski and Boss Key have created an old-school game with modern, popular sensibilities.

Like Call of Duty before it, you can expect to see Overwatch influence an entire generation of multiplayer shooters over the next few years. It will also be fascinating to see what the games which began development afterOverwatch’s launch will look like. Returning to Bleszinski’s soda analogy, if Overwatch is Coke and LawBreakers is Pepsi, expect there to be several new premium cola launches in the next few years – plus the odd supermarket own-brand. The most interesting ones, though, will be Dr. Pepper and Sprite; the same foundation ideas, but with entirely different flavours.