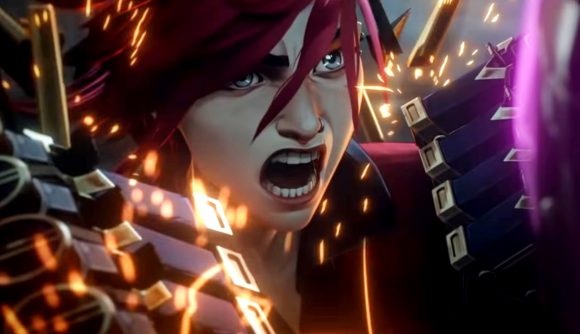 With League of Legends’ upcoming animated series Arcane due to drop sometime this autumn, it seems it’s time for us to start getting a good ol’ peek at what it’ll bring. While there doesn’t seem to be any recent word on Riot Games’ English language channels, it seems the studio has shared a new clip of the show on League’s Chinese Weibo site, which gives us around two minutes’ worth of footage to check out.

Redditor Anonymous_B has posted the clip which they say is from the League Weibo on Reddit. You can see this in full below (cheers, Dot Esports!). As you can see, the clip’s all about Vi and Jinx’s younger selves perched on a night-time rooftop in the almost steampunk-y city of Piltover. While the subtitles are in Chinese, the voices are in English, so you can hear their conversation for yourself.

The pair discuss their home city, peering at its different places in the distance and recounting memories of things that happened in those spots in the past – such as one of Vi’s childhood toys, which got cruelly thrown into an unreachable spot by a bully. “We’ve all had bad days,” she explains to Jinx, “but we learn. And we stick together.”

Jinx then takes out some mysterious, glowing trinkets from her pocket – neither of them know what they are, but Vi advises her to keep the jewels a secret between them. The clip ends with a gorgeous shot of Piltover’s horizon, with its many glowing lights, and Vi telling Jinx she’s stronger than she thinks, and that one day the city will respect them both. With some epic music thrown in, of course. Here’s the clip:

There’s no release date for Arcane just yet, but it’s due to drop sometime this fall. When it was first announced, Riot said the series was going to be set in “utopian Piltover and the oppressed underground of Zaun”, with the origin stories of two iconic League champions front-and-centre, with a clip shared in June this year giving us a look at some footage of JInx and Vi as their grown-up selves (below).

Co-creators Chirstian Linke and Alex Yee also posted a video discussion about the show back in June, which you can check out at that link if you’re keen to know more ahead of its arrival later this year.